T.I. will release his new album Dime Trap on Friday. The album was announced earlier this year, and was preceded by the singles “Jefe” featuring Meek Mill and “The Weekend” featuring Young Thug. Dime Trap will be T.I.’s tenth studio release.

How to Stream & Listen to T.I.’s New Album

Dime Trap will be made available on a number of different platforms at 9 p.m. Pacific time on Thursday or midnight Eastern time on Friday. We’ve listed the streaming platforms that the album will be released on, and the ways in which you can listen to them below.

You will be able to stream T.I.’s album on iTunes and Apple Music. If you have an Apple Music account, you can go into the app on your phone or tablet and set the notifications to alert you when the album is out. Click here to learn how.

Based on the standard release schedule for Spotify, Dime Trap will also be available to stream. If you don’t have a Spotify account, you can sign up for one here and pay only $0.99 for the first three months.

T.I.’s album will also be available to listen to on Tidal. The streaming service offers a free 30-day trial with Tidal Premium, which provides  access to music videos and curated playlists.

In an interview with Genius, T.I. said that Dime Trap was a spiritual successor to his 2003 album Trap Muzik, and explained how he’s still able to tell stories about the streets despite being removed from the lifestyle. “It has now grown to a place where it is the philosophy of former, retired dope boys,” he reasoned.

“I think that making it through that life,” he added, “enduring and overcoming the pitfalls and consequences that come with that lifestyle while not compromising the morals, standards, and principles that I developed within the lifestyle, the perspective is much different, but the energy is the same.”

The rapper also spoke on the importance of sending a positive message to his community. “It ain’t but so many ways to make it out of the crack era or the crack epidemic,” he said. “We took it and turned it into a revenue stream, and used that to change the lifestyles of our families forever… we could either still be out there selling crack, serving a lifetime in prison, or dead.”

In another interview with Rolling Stone, T.I. promised fans that they can expect a blend of classic and contemporary sounds. “You can expect Da’ Nic [EP] but a little more articulate. A little more detail,” he said. “Da’ Nic is kind of like giving you your dessert first. It’s gonna be a little more introspective. Different aspects of the lifestyle… Classics don’t get old, that’s why they call it classic. And I think that nobody is stepping out on that limb, because [of] fear of being considered old . . . Somebody old enough to know, but young enough to execute, has to do it.” 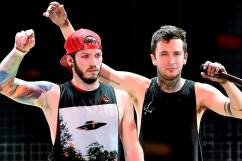