Blake Shelton’s team enters the top 13 competition for season 15 of The Voice, with three artists left on his team. Adam Levine also has three contestants remaining on his team. There are 13 singers left in the cast and only one will end up the winner, at the end of this journey. Both Levine and Shelton have been judges on The Voice since the beginning of the series and they have each won several times, so there’s a good chance one of them could succeed once again. Read on for the details on each of their remaining contestants.

Dave Fenley, Kirk Jay, and Chris Kroeze are the remaining three artists on Shelton’s team. Kroeze is 27 years old and hails from Wisconsin. After Kroeze found out he was voted through to the top 13, he tweeted out this message to his Twitter followers, “Thank you for voting me through America! Love you all!! Looking forward to working with Blake Shelton again!”

Fenley is 39 years old and hails from Nashville, Tennessee. Dave Fenley was the contestant who Blake Shelton chose to save and keep, going into the top 13.

Jay earned a four-chair turn from the judges after singing “Bless the Broken Road” for his blind audition. He is 22 years old and hails from Bay Minette, Alabama. Kirk Jay was one of the first contestants to find out that he made it into the top 13 this season, with his performance of “One More Day” winning a ton of votes on Team Blake last week. After finding out that he made it into the top 13, Jay told the Montgomery Adviser, “I was so overwhelmed. I was so grateful for the moment that had just took place … I’m so honored, I’m so grateful and I’m so appreciative to have all the support that’s behind me, man. All of America that believed in me. I want America to know from the bottom of my heart that I really do appreciate them for supporting my dream.” 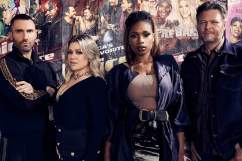 Adam Levine’s final three contestants are Tyke James, Reagan Strange, and DeAndre Nico. Levine was the only coach to turn his chair for James during his blind auditions. James is Hawaiian and is just 17 years old, with a head of flowing, blonde hair. Levine actually chose to save James, after his other two contestants were picked by America’s votes. When Levine made his decision on the show, he said, “I’m gonna go with the person that I think … there’s more that I need to see from this person and I can’t leave it to the unknown. I can’t say, ‘What if?’ I’m gonna go with Tyke.”

Reagan Strange is from Memphis, Tennessee and she is only 14 years old, which makes her the youngest contestant on Levine’s team. Because of her young age, her mother has accompanied her on this journey and she gets out of long rehearsals for the show, earlier than some of the other contestants.

DeAndre Nico hails from Port Arthur, Texas and is 22 years old. For his blind audition, he earned a four-chair turn from the coaches. When it came to the results that moved him into the top 13, Nico told Beaumont Enterprise, “I have more work to do here, and God decided that. I’m forever grateful to him for that — that there’s more to do on this path … I’m going to miss everyone that left … There were a few people I thought might be here — some great artists. But now they get to go home and start their careers, so that’s great.” He said that he has learned to expect the unexpected in this competition.

Read More
Reality TV, The Voice, TV
Blake Shelton's and Adam Levine's teams on season 15 of The Voice head into the top 13 competition. Get to know their current cast of performers.