Shawn Mendes is set to perform at the Victoria’s Secret Fashion Show tonight on ABC. With this in mind, many pop fans may be wondering whether the singer is in a relationship. Mendes is notoriously quiet about his dating life, and does not appear to have a serious girlfriend at this time.

In a recent interview with Variety, Mendes, 20, spoke on the fact that he’s not currently looking for anything serious. “I’’m not currently dating anyone, but it’s not because I don’t have time — I don’t know if I’d be dating anyone if I was home in Pickering, [Ontario], either,” he explained.

“It hasn’t stumbled across me, and I’m not chasing it,” he continued. “Of course, seeing all those other artists and people in relationships, you think, ‘Maybe it would be nice; who would be great for me?’ And that’s when you realize: ‘This is wrong. Let it be. I’m not supposed to be with anyone right now.'”

Mendes has been romantically linked to numerous celebrities over the past few years. Many believed that he and fellow performer Camila Cabello were dating after they sang the pop duet “I Know What You Did Last Summer“, but both maintain that they are just close friends. “Every time I try to make a move she just swears me off,” Mendes said when they both appeared on The Late Late Show with James Corden. “It’s never gonna happen.” Cabello joked back, saying: “He friend-zones me! He calls me ‘kid!'”

Mendes Has Been Romantically Linked to Camila Cabello & Hailey Baldwin

Mendes also sparked dating rumors earlier this year when he attended the Met Gala with model Hailey Baldwin. Many speculated as whether they were dating, but Mendes straightened things out with E! News, telling the outlet that he and Baldwin are simply friends.

“I was so lucky for my first time going there to be able to go with someone like Hailey because she’s such a vet and I really admire people like her because of how outgoing she is in such an overwhelming experience,” he said. Mendes later admitted that there was more going on between him and Baldwin than he initially let on. “I don’t even wanna put a title on it,” he said. “I think it was more of a zone of limbo.” Baldwin has since gone on to marry pop singer Justin Bieber.

Of course i have my insecurities and struggles but that’s just one part of me. Sometimes the positive side of a story doesn’t always get fully told and I wish it had here. I love what i do and i love you guys so much ❤️

Mendes has also had to deal with rumors about his sexuality. He spoke about the pressures of having to prove he’s not closeted in a recent Rolling Stone profile. “I’d like to say I don’t care about it, but that’s not true… this massive, massive thing for the last five years about me being gay,” he revealed.

The singer went on to explain that he feels the need to be seen with as many women as possible to dispel the rumor. “In the back of my heart, I feel like I need to go be seen with someone — like a girl — in public, to prove to people that I’m not gay,” he said. “Even though in my heart I know that it’s not a bad thing. There’s still a piece of me that thinks that. And I hate that side of me.” 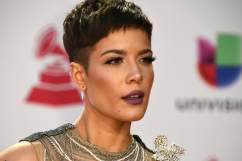 Halsey Boyfriend 2018: Is the Singer Dating Anyone?