Carol and her husband❤

Carol Burnett is a comedic icon and she is most known for her long-running variety series The Carol Burnett Show. Since 2001, Burnett has been married to a man 23 years younger than she is and the two are still together today. Brian Miller is Burnett’s longtime husband and together, they live in Santa Barbara. Get to know more about the couple’s marriage, Burnett’s past marriages, her family and more below.

Prior to meeting Miller, Burnett was married twice. Her first husband was a man named Don Saroyan, while her second ex-husband was Joe Hamilton (pictured above). Burnett’s first husband, Saroyan, was her college sweetheart and he ended up in acting as well. Hamilton was also in the entertainment business. Saroyan and Burnett married on December 15, 1955 and they divorced in 1962. Saroyan died on November 24, 1990. He was known for movies such as Blast of Silence, Cuban Rebel Girls and Decoy, according to IMDb.

As for second husband Joe Hamilton, he was a divorced father of eight when he first met Burnett and he died seven years after their divorce. Hamilton passed away in 1991 after battling cancer of the head and neck, according to the NY Times. That same year, he had married third wife Sandy Troggio.

Carol Burnett grew up in Texas and she came from a family who was in entertainment. Her mother was Ina Louise, a publicity writer for movie studios, while her dad, Joseph Thomas Burnett, was a movie theater manager. Unfortunately for Burnett, her parents were both alcoholics and ended up divorced, so Burnett moved in with her grandmother, Mabel Eudora White.

2. Miller Is a Successful Musician

Brian Miller was a principal drummer and contractor of the Hollywood Bowl Orchestra for years. People reported that Burnett had been single for over 20 years when she “quietly” married Miller, who she had been dating for three years.

When talking about the couple’s age gap to People Magazine, Burnett said, “He’s funny and not easily intimidated. As we get older, the gap between our ages narrows. If you were 40 and married a 20-year-old, I don’t think you could communicate like [we do].”

As a couple, Miller and Burnett enjoy spending time with friends when they are at home in Santa Barbara, California.

3. The Couple Never Had Children Together

Together, Burnett and Miller have never had children, but Burnett has three daughters from her previous marriage to Joe Hamilton. Burnett’s daughters’ names are Jody, Erin, and Carrie. Unfortunately, Carrie died of cancer at the age of 38.

In an interview with People, Burnett admitted that her daughter Carrie’s drug use in her teens wore on her marriage to Joe Hamilton. They even tried therapy. Burnett, Hamilton and their three daughters posed for the cover of People in 1979.

4. Burnett’s Daughter Carrie Hamilton Was Diagnosed With Cancer the Year She Married Miller

Carol Burnett’s daughter Carrie Hamilton struggled with drug addiction, beginning at the young age of 13, but this was not what caused her demise. In 2001, the same year that Burnett married Brian Miller, her daughter was diagnosed with lung cancer. By November 2001, Hamilton was told that her lung cancer had spread to her brain.

According to People, Burnett and Miller were only married for two months when her daughter died. When friends of Hamilton’s gathered to share memories and their grief, Burnett reportedly only stayed about twenty minutes. She left to mourn at her own house in private with her new husband. Hamilton contracted pneumonia, which led to her death, and her mother, along with siblings, were at her side when she passed away.

5. Carol Burnett’s Second Husband Produced Many of Her Projects

Joe Hamilton, Burnett’s second husband, was working on The Gary Moore Show when Burnett was a regular on the program. He produced a great deal of Burnett’s work, like her 1962 Carnegie Hall concert and The Carol Burnett Show. The NY Times reports that other projects of Burnett’s that Hamilton produced included Mama’s Family, Carol and Company, Carol Plus 2, Julie and Carol at Carnegie Hall, Julie and Carol at Lincoln Center, the TV version of Once Upon a Mattress, 6 Rms Riv Vu, and I Do! I Do!. 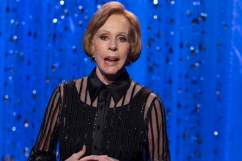 Read More
Celebrities
Get to know more about Carol Burnett's husband Brian Miller and the men she was married to before, along with her three daughters.