Vanessa Simmons currently stars on the reality series Growing Up Hip Hop. She has been in a long term relationship with actor Mike Wayans, and together they have a daughter named Ava Marie.

There’s been some confusion surrounding Vanessa and her sister Angela Simmons, and which one of them recently lost their baby father in a shooting. The incident in question happened to Angela. Learn more about Vanessa’s boyfriend Mike and their family below.

1. He Is the Son of Comedian Damon Wayans, Sr.  & Model Lisa Thorner

Mike Wayans was born on March 28, 1985 in Los Angeles, California. His parents are Damon Wayans, Sr. and Lisa Thorner, the former of which is a comedian best known for the sketch series In Living Color and films like Major Payne and The Last Boy Scout.

Mike is the nephew of other famous entertainers, including Kim Wayans, Shawn Wayans, Marlon Wayans and Keenan Ivory Wayans. Mike’s mother Lisa Thorner is a former model who was married to Damon, Sr. from 1984 to 2000. She is currently single.

Damon, Sr. started dating Charity Duplechan shortly after his divorce was finalized in 2003, and they are still together according to Daily Entertainment News. Mike’s older brother Damon, Jr. is also an actor and comedian, having appeared on shows like New Girl and FOX’s Lethal Weapon.

2. He Has Appeared In Films Like ‘Blankman’ & Dance Flick’ Alongside His Other Family Members

Mike made his film debut with 1994’s Blankman. The film was an adaptation of the comic book series of the same name, and starred Mike’s father Damon, Sr. Mike went on to play a supporting role in the TV show My Wife and Kids from 2001 to 2003. The sitcom starred Damon, Sr. and Tisha Campbell-Martin as Mike’s fictional parents.

As he got older, Mike continued to act in films and TV shows with his family members. He had a bit part in the 2009 parody film Dance Flick alongside uncle Shawn Wayans, cousin Craig Wayans, and brother Damon, Jr. The film received negative reviews from critics but grossed $32 million at the box office.

As a musician, Mike composed the theme music for the 2006 TV series The Underground. Given the success of these releases, Earn the Necklace reports that Mike has an estimated net worth of $2.5 million.

3. He Welcomed Daughter Ava Marie Jean Wayans With Vanessa In 2014

Mike and Vanessa began dating in 2005, and welcomed their daughter Ava Marie on January 4, 2014. They had the baby shower at the Sugar Factory in Hollywood, which was attended by celebrities like actor and musician Tyrese Gibson and Vanessa’s father Joseph “Rev Run” Simmons. During an interview with Vibe, Vanessa talked about how her and the rest of her family spoil the baby with clothes.

“I want her to discover herself. I’m not going to push her in any one direction,” she said. “I want her to discover herself and do whatever it is that makes her happy and pursue her interests. But at the same time, my sister, her aunt, is crazy fashionista and every time she comes to L.A. she’s bringing her a bag of clothing from some store. She has to stop by Nordstrom.”

“And I’m no different because every time I go out, I can just be going to CVS and I will find an outfit from Burts Bee’s Baby,” Vanessa added. “I come back home and I’m supposed to go out to get dish detergent and Mike is like, you went shopping for the baby again? I can’t help it! It’s a girl! She’s like a little baby doll. I do think she’ll have that fashion side to her.”

4. Vanessa Has Said That She Doesn’t Want Mike & Ava Marie On ‘Growing Up Hip Hop’ With Her

Despite her high profile on shows like and Growing Up Hip Hop, Vanessa has made a point of keeping her public and personal lives separate. “I just like to keep a little bit lower profile,” she told Bossip. “It’s hard to display your life and have people judge everything about you. I just want to keep [Ava’s] life as normal as possible for as long as possible.”

Vanessa also said that she just doesn’t want to carry out her relationship with Mike in the public eye. “Relationships are hard as it is,” she said. “Adding the public to it can get more messy. I just try to keep as low a profile as I can and focus on my work.”

Mike and Vanessa have discussed getting engaged at some point in the future. The latter confirmed to Entertainment Tonight that they have discussed it, and are simply waiting for the right time to get married.

5. Both Mike & Vanessa Want More Kids After They Get Married

Vanessa told Entertainment Tonight that she and Mike want to have more children after they get married. “Dealing with a 3 year old is very challenging, but I think eventually yes [we will have more kids] after Mike and I tie the knot,” she said. “That’s the biggest thing. Just making sure we’re on the same page and communication. Especially with a 3-year-old. Organization is key.”

The Growing Up Hip Hop star also spoke on juggling a family with her fashion career. “My focus after having [Ava Marie] was being at home, being with her, bonding with her and learning how to be a mom, because it’s a lot thrown at you all at once,” she told Vibe. “But then this opportunity came. I love fashion, so to be involved in that level, I want to take this opportunity. They were excited and definitely really supportive of my decision to jump back into work so soon.” 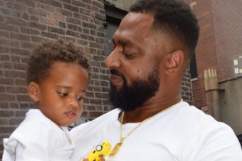