Now let’s get into the details …

The woman who gets the first impression rose and a kiss from Underwood is contestant Hannah G. She’s a 23-year-old content creator and Instagram model. “From the beginning of the night, I’ve put a lot of thought into the first impression rose,” Underwood said before offering her the night’s coveted prize. “It’s so enjoyable to be around you… so Hannah, will you accept this rose?”

“There’s definitely a chemistry and a nice spark with Hannah,” Underwood added during his interview, “I didn’t want to stop kissing her tonight.” Hannah had similarly positive things to say for the camera. “I never, ever thought I’d be considered for this,” she revealed. “I haven’t felt this quick and easy of feelings, ever.”

Hannah G. Is the Lucky Recipient of the First Impression Rose

Lounge wear you can run errands in, too. That’s the best kind. ?

According to her bio on ABC, Hannah is also “the photographer and model for her burgeoning social media business.” Now there is another Hannah in competition this season, and she also hails from Alabama, but her last name is Brown.

Hannah elaborated on her unique career path on her website, HannahGodwin.net. She wrote that she actually went to school to study photography, but that she wound up graduating with a degree in business marketing instead. In 2013, when she was about 18 years old, she “stumbled across [her] path” of modeling and has been doing it ever since. “I’ve combined modeling with photography to become an influencer — so that’s how that happened,” she added.

Hell yeah, we accept! See you there, #BachelorNation⁠⁠. #TheBachelor⁠ ⁠

If we look back at the show’s history, the answer could be yes. It’s been a pattern that the star of The Bachelor or The Bachelorette has often ended up with the person on the show who gets the first impression rose and/or the first kiss.

Clearly, that means Hannah has a good chance of winning Underwood’s heart with both of those under her belt. PopSugar went as far as to cite Hannah as one of the season’s undeniable frontrunners. Hannah goes by hannahg11 on Instagram, where she has over 75K followers, but her account has been set it to private while she’s on The Bachelor. She also set her Facebook to private.

So happy the girls have been announced! I can’t wait to watch your journey on @bachelorabc my love ? America, get ready to fall in love with this amazing, kind, funny, sweet spirit @hannahg11 ? #thebachelor #hannahg

Hannah may seem familiar to longtime viewers, as she’s friends with fan favorite and former contestant Danielle Maltby. Maltby appeared on Nick Viall’s season of The Bachelor and also a season of Bachelor In Paradise, where she had an on/off romance with Wells Adams.

Maltby even celebrated Hannah’s addition to the cast on Instagram, writing: “So happy the girls have been announced! I can’t wait to watch your journey on @bachelorabc my love ? America, get ready to fall in love with this amazing, kind, funny, sweet spirit @hannahg11.” 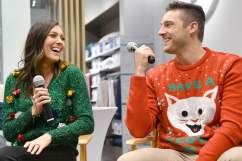