The mystery of which celebrities are under the costumes will continue on tonight’s episode of The Masked Singer. Fans have been shocked to discover the identities of unmasked performers thus far, and now, the judges are determined to uncover the remaining batch.

We’ve assembled the guesses that each of the judges (Jenny McCarthy, Robin Thicke, Nicole Scherzinger and Ken Jeong) have made up to now, as well as the clues as to why they think the celebrity in question could be under their respective mask. Here are the judges’ guesses so far for each performer:

Get your shine on with #DeerMask tonight! ? The party begins at 9/8c on @foxtv. #TheMaskedSinger

Based on the package of clues made available, The Deer been around for a while, and said that its imperative that “Ravens beware”, suggesting that the person has played for the Pittsburgh Steelers. “Love all your albums… Brett Favre!” said guest host Joel McHale. “Brett Favre might be the best guess yet,” Thicke added. “I gotta be honest with you.”

Don't forget to look both ways before crossing. ? #MonsterMask #TheMaskedSinger

The Monster has proven a trickier performer for the judges to get a grasp on. Thicke commented that The Monster had a “soulful voice” and Nicole Scherzinger said likewise. The former Pussycat Doll guessed that it might be rapper Gucci Mane.

She's here to prove herself… but who is she? ? #UnicornMask #TheMaskedSinger

The Unicorn has said that she’s from Beverly Hills, that her childhood looked magical from the outside but wasn’t. The judges have taken these clues and gone off in a number of different directions. Scherzinger guessed Meghan Markle as a potential candidate, while McCarthy guessed Ireland Baldwin, the sister of Beibe’s wife Hailey Baldwin. Thicke took the clues about The Unicorn’s childhood being magical and guessed former child star Lindsay Lohan.

Let #RabbitMask reel you in. ? Hop over to the ? in bio to see him on #TheMaskedSinger stage.

The Rabbit said he spent “most of my life on stage, but I was never alone,” which hints at the possibility that he was part of a group. He also said: “I pop up here and I pop up there” and that his “forte” is “synchronized singing.” He confirmed that he was in band at some point in his life. Thicke has guessed former N*SYNC member Joey Fatone, while Scherzinger has guessed street magician Criss Angel. Jeong has thrown out a number of guesses, including former Backstreet Boy Lance Bass.

The Alien revealed that she comes from a famous family, where “anonymity is a completely alien concept.” She also said that because she grew up in the public eye “My life was never my own.” Another huge clue is that while she’s “let others define” in the past. McCarthy guessed that The Alien may be a member of Spice Girls, while Jeong thinks its Kourtney Kardashian under the costume. Scherzinger extended her guess to include Kendall and Kylie Jenner.

Scherzinger: A Kardashian or a Jenner

We're rantin' and ravin' for #RavenMask. Who do you think it is? #TheMaskedSinger

The Raven said she spent most of her life listening “to other people’s stories and now it’s [her] opportunity to share [hers].” She also said that she recently suffered a tragic loss and this is “a chance to honor my beloved.” The Raven has most of the judges stumped, though McCarthy did guess that she could be Sherri Shepherd. Jeong countered and guessed that The Raven could be Star Jones. 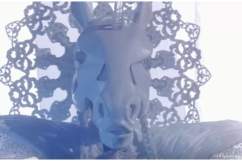 Who Is Performing Tonight On ‘The Masked Singer’?