HBO’s True Detective is back for its third season. The crime anthology is coming off a critically reviled second season, and fans have been hopeful that the new series, starring Oscar winner Mahershala Ali, will be a return to form. The two-hour premiere starts at 9 p.m. ET.

Given the fact that season three is said to be similar in tone and story to season one, we’ve assembled a recap on all the primary cast members as well as the main case that the titular sleuths investigated. Below is a recap and review of the entire first season. So of course, this article will have major spoilers from here on. The season follows two veteran policemen over twenty years:

Rustin “Rust” Cohle (Matthew McConaughey) is a former detective for the Louisiana State Homicide Unit. He also worked as an undercover agent during his youth, and is prone to having hallucinations due to years of exposure to narcotics.

Martin “Marty” Hart (Woody Harrelson) is a former detective for the Louisiana State Homicide Unit as well. He is the opposite of his partner Cohle in that he is charming and outgoing, but he is prone to cheating on his wife; with whom he has two daughters.

The series opens with Cohle and Hart being partnered up for the Dora Lange case in 1995. Everything is told in flashback, with the retired detectives looking back on the investigation, and the way in which it led to the disintegration of their friendship. We eventually learn that Cohle’s daughter was killed several years prior, and that her death led to both the dissolution of his marriage and his negative outlook. Hart, meanwhile, attempts to keep up the image of an idyllic home life despite the fact that he’s cheating on his wife Maggie (Michelle Monaghan) with a young courthouse staffer.

Lange’s diary contains pages about someone called “The Yellow King”, which Cohle and Hart keep coming across during their investigation. They are eventually led to a suspect named Reggie Ledoux. The detectives sneak onto Ledoux’s meth lab, which is hidden in the bayou, and discover two abused and kidnapped children on the compound. Hart shoots and kills Ledoux in a rage, and Cohle decides to plant evidence to make it look as though an intense shootout has taken place. They report that Ledoux was the killer, and are hailed as heroes at the police station and in the press. They also receive commendations and promotions.

The series then jumps forward to 2002, where Cohle and Hart have grown closer as friends, and the latter’s wife has stayed with him despite learning of his prior infidelity. During a routine interrogation, however, one of Cohle’s suspects mentions that they will give information about Dora Lange’s real killer in exchange for a plea deal. The suspect also mentions “The Yellow King”, which catches Cohle’s attention. The suspect kills himself in his cell before Cohle can verify his claims. Nevertheless, his need to find out the truth about Lange’s killer forces him to re-open the case.

Cohle’s investigation causes friction with Hart and the rest of the department. He’s eventually suspended from duty for looking into an influential political family known as the Tuttles. Hart, meanwhile, has struck up another affair with a young woman he knew from years earlier. After Maggie discovers the affair, she manipulates a drunken Cohle into having sex with her as revenge. After she tells Hart, he and Cohle fight in the police station parking lot. Cohle quits the police force immediately afterwards.

All these scenes are interspersed with the interviews that Cohle and Hart are giving in the present day. Cohle has become a recluse who works at a local bar, and Hart is divorced and runs a security business. After their respective interviews are over, the two men reluctantly join forces again to find “The Yellow King.” Cohle reveals that he’s spent the last ten years investigating, and the duo eventually track him down to a house out in the middle of nowhere.

Both Cohle and Hart are seriously wounded by “The Yellow King”, but the former manages to squeeze a shot off and shoot him in the head. The police arrive on the scene shortly after. Hart is brought to tears when his ex-wife and daughters come visit him in the hospital. Cohle, meanwhile, says that he in his near death experience he felt the presence of his own daughter, and that the experience gave him a renewed outlook on life. The season ends with Cohle and Hart talking about the eternal battle between light and dark. They quietly leave the hospital together. 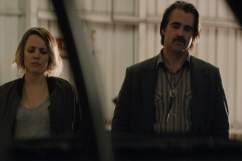