Beyonce just put out the Netflix documentary Homecoming, which details her 2018 performance at Coachella. In addition to her grueling rehearsal process, Beyonce opens up about her recent pregnancy, and how she thought she’d “never be the same” after giving birth to twins Sir and Rumi Carter.

“I got pregnant unexpectedly and it ended up being twins, which was even more of a surprise. My body went through more than I knew it could,” she said in the doc. “I was 218 lbs the day I gave birth. I had an extremely difficult pregnancy. I had high blood pressure, I developed toxemia, preeclampsia, and, in the womb, one of my babies; heartbeat paused a few times. So I had to get an emergency C-section.”

Beyonce Revealed that Her Recent Pregnancy Was ‘Extremely Difficult’

Sir and Rumi Carter were born on June 13, 2017. During an Elle interview, Beyonce talked about her children and what she hopes “It’s important to me that they [my children] see themselves as CEOs, as bosses, and that they know they can write the script for their own lives—that they can speak their minds and they have no ceiling,” she revealed. “They don’t have to be a certain type or fit into a specific category. They don’t have to be politically correct, as long as they’re authentic, respectful, compassionate, and empathetic.”

Homecoming shows footage of the singer’s first post-pregnancy rehearsal, where she struggles to keep up. “There were days that I thought, you know, I’d never be the same,” she admitted. “I’d never be the same physically, my strength and endurance would never be the same. A lot of the choreography is about feeling, so it’s not as technical. It’s your own personality that brings it to life. And that’s hard when you don’t feel like yourself.”

The Singer Revealed that She Had Trouble Getting Back In Shape

The documentary is a eye opener. It taught me a lot of sacrifices and how to go through processes. Beyoncé made me question myself. Am I making any sacrifices to get where I wanna be? Am I working hard going through the processes of life to make a difference? Am I changing anyone’s life for the better? Am I giving my all and giving all my love? She is a true mentor and Beychella and this documentary is life changing. “Keep going,no matter what “Thank you Beyoncé I won’t give up on my dreams. I am beautiful and I will inspire the world someday. I won’t let low self esteem hold me back anymore. I’m giving it my all????? #beyoncé #homecoming #documentary #carterkids #blueivycarter #rumiandsircarter #jayzandbeyonce #beyonceandjayz #queenbee #yonce #quotestoliveby #lifechanges #beyhive #likeforlikes #thelovehive #lifegoals #inspirational #inspirationalquotes #film #family #beyoncetwins #beyonceknowles #beychella #coachella

“I had to rebuild my body from cut muscles. It took me a while to feel confident enough to freak it and give it my own personality. In the beginning, it was so many muscle spasms. Just internally, my body was not connected. My mind was not there. My mind wanted to be with my children. What people don’t see is the sacrifice. I would dance, and go off to the trailer and breastfeed the babies, and the days I could, I would bring the children.”

Beyonce went on to reveal that she dieted to help her return to her normal shape. She stopped consuming bread, meat, fish, carbs, sugar and alcohol. She admits that her limited diet made her “hungry,” but said that she had to “take care” of her body because she had a family to look after. 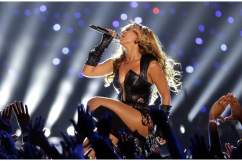