Gabe Solis’ illness and subsequent death is a huge talking point on Braxton Family Values. Gabe was the ex-husband of series star Traci Braxton, and he was diagnosed with pancreatic cancer late last year. He died on December 21, 2018 at the age of 43.

A member of Gabe’s family told MTO News that he went to the hospital “just a few months” prior to his death. “Imagine thinking you’re completely healthy, and going to the doctor and finding out you have a few months to live,” they said. Gabe and Trina wed in 2003 and divorced in 2015, though their on-and-off relationship was a frequent topic on the series.

Gabe Solis Was Diagnosed With Pancreatic Cancer In Late 2018

On behalf of the Management & Staff of @barchix We want to send our Love and Our Condolences to the Solis & The Braxton Family!!! We know this is a Very difficult time and it was so very Sudden!! We ALL Love @gabe_solis1234 !! Amazing Friend, Amazing Patron to @barchix & Overall Just an AMAZING PERSON!!! So we are Going to Continue to Cover Both Families in our Prayers!! && Pray for Supernatural Strength for @trinabraxton1 & The Kids!!! We love you all!!! #RIP #GabeSolis #BarChix

An episode from last season, “Iyanla: Fix My Life”, even focused on the couple as they hashed out their issues with one another and tried to figure out how to parent their children peacefully. Gabe did not have children of his own, but he helped raise Traci’s sons; Eric and Caleb Mojica, from previous relationships.

“It was a very difficult time,” Traci told Entertainment Tonight. “My sons had a really difficult time as well, but you know, thank god for my fiance now. Hey, Von! You know, he really helped me through it, he stood right by me and I knew it was sometimes difficult for him, you know, especially to watch me as his now fiancee, but grieve over someone else.”

Trina Braxton’s ex-husband dies of cancer at the age of 43. Trina speaks out on Instagram: ・・・ On December 20, 2018, a chapter permanently closed for my sons and I. For over 16 years, Gabe Solis was an essential part of our lives. Like all families, there are good and bad moments that are endured, but those moments, good or bad still made us who we are in the present. Unfortunately, someone leaked the story before we could make everyone aware of his passing, and I apologize to those friends and family members for finding out through social outlets. I also apologize directly to the Solis Family. I do humbly ask for your prayers for our families, but my greatest request is that when you are posting comments, remember Gabe’s passing is a loss for our family. He was a father to my boys, a son, brother, and friend to many and I would appreciate privacy and respect as we grieve his unexpected departure. @gabe_solis1234 I miss you, my dear friend. #trinabraxton #gabesolis #gabesolisdiesat43fromcancer #jaysblogspot

Trina, who is currently engaged to boyfriend Von Scales, talked about Gabe’s passing and the emotional toll it took on her. “It was very difficult and it was definitely untimely. He was only 43. A lot of people don’t know this — not that it’s their business anyway — but we were actually the best of friends and talked just about every day,” she told Essence. “We just made better friends than spouses. But it was a really difficult time, especially being in another relationship.”

“Sometimes when you are close with your ex, [your current partner] doesn’t understand how you can still have a friendship… especially when they’ve seen the tough times via television,” she continued. “Von had his moments of support. For him it was difficult to watch his significant other grieve over their ex, but it was more than that because he was my friend and raised my children when their biological dad didn’t. At the end of the day, he couldn’t help but respect [Gabe] for that.” 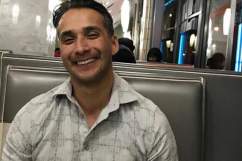