TLC LaShanta White, a bedridden mother-of-four who weighs over 600 pounds, decides to take control of her life on tonight's episode of My 600 Lb. Life.

LaShanta White, a bedridden mother-of-four, is the subject of tonight’s episode of My 600 Lb. Life. White recently moved to Houston from Louisiana to seek out the help of celebrity bariatric surgeon Dr. Younan Nowzaradan, most commonly known as Dr. Now, to try to shed some weight and get her health back on track. But will she qualify for Dr. Now’s operation? White will have to lose over 100 pounds to show Dr. Now that she means business.

The synopsis for tonight’s episode reads: “Bed-bound for 2 years, Lashanta relies on her 4 kids to keep her cleaned and fed. Her last chance to break the cycle of food addiction that’s killing her is to join Dr. Now’s program, but it will take a village just to get her out the door.”

Bedridden and mother of 4, LaShanta is determined to change her life before she turns 40. Follow her journey on #My600lbLife Wednesday at 8/7c. pic.twitter.com/jNExdeb5sL

“I’ve been trapped in this bed for years now,” she says in a voiceover for tonight’s episode. “I’m about to leave my children without a mother. And thinking about that … it hurts.” A shot of an ambulance can be seen in the clip, with White inside, strapped to a few tubes and wrapped in a blanket.

White weighs more than 600 pounds, and is determined to change her life before she turns 40. The mother-of-four had been bedridden for two years, with her children and boyfriend being her main caretakers, when she decided it was time to take control of her weight and lead a healthier lifestyle.

Unfortunately, White has hit a few bumps in the road so far. She says she really started to struggle with her weight loss journey after her boyfriend left her, and she fell into a deep depression shortly after.

“In the last couple of weeks, things have been really bad because JT and I broke up,” she says in a clip from tonight’s episode. “I knew he was worried about me losing too much weight, but I still thought I had the support to do this. Then he said if I lost the weight, he wouldn’t be attracted to me anymore. And then he left me.”

White continued: “So I don’t know what to do right now. Without JT, I don’t have anyone to help me no more. So I’m really depressed about this because it feels like every time I try to turn my life around and get my head above water, it just feels like something’s there to trip me up and drag me back down.”

So White decided to seek out the help of Dr. Now. She uprooted her life in Kenner, Louisiana, to travel to Houston and take the necessary strides she needs to lose her excess weight. When she initially arrived in Texas, she wasn’t approved for the weight loss surgery. However, she didn’t let that discourage her, and after losing a total of 133 pounds, White revisits Dr. Now, who approves her for the surgery on the condition that she remains in the hospital and works on her mobility. 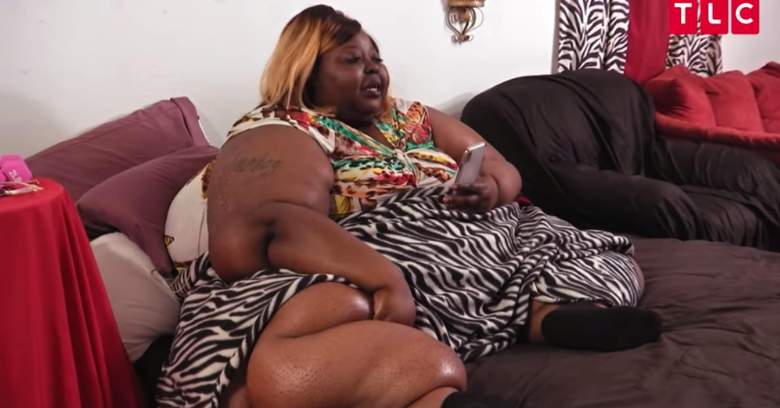 TLCLashanta White on My 600 Lb. Life is working to lose weight before her 40th birthday.

“I can’t wait for all the positive and good stuff coming to me,” White says to the cameras. Her goal is to have the weight loss surgery and walk by this time next year.

Luckily, White has the help of her best friend Missy to keep her motivated through her journey, as well as help her back on her feet following her breakup. During tonight’s episode, she calls up Missy, who tells her that she is better off with JT, and that his leaving helped motivate her even more to concentrate on her health.

“Sometimes things happen for the greater good,” she tells White in the clip. “So maybe you needed him to leave so you can concentrate and be focused on what you’re focused on.”

Tune in tonight to catch White’s story on My 600-lb Life, which airs Wednesdays at 8/7c on TLC.

Read More
My 600 lb Life, Reality TV
LaShanta White, a bedridden mother-of-four who weighs over 600 pounds, decides to take control of her life on tonight's episode of My 600 Lb. Life.