Taylor Swift is about drop something huge. The pop songstress has been teasing fans with cryptic messages and clues all month, and soon she’ll be revealing what it is. But what time is the release set to happen? According to the countdown on Swift’s website, the single “ME!” will come out at 9 p.m. PST on Thursday, April 25, or midnight EST on Friday, April 26, depending on your time zone.

The single and music video will be made available on streaming platforms like Apple Music and Spotify. Generally, new music become available around midnight EST on these platforms. This was the case for Swift’s previous studio albums, 2014’s 1989 and 2017’s Reputation. On occasion, however, these platforms will throw a curveball at listeners.

The ‘ME!’ Single Will Be Released at Midnight EST on April 26

I love you guys. So much. ?: @presleyannphoto @gettyimages

There is also the possibility that the countdown will merely announce a new album, or provide a release date for the album’s lead single. Swift has been incredibly active on social media, using color schemes and background changes to suggest that she will be entering a new phase of her artistry.

Swift Has Teased the Project’s Release on Instagram & Spotify

For example, the background of every Taylor Swift song on Spotify has changed to display her “4.26” countdown, except for “The Story of Us,” the seventh song on her album Speak Now. The song’s runtime is 4:26, and it includes the phrase “next chapter” in it, which seems to confirm the belief that Swift is rolling out her latest artistic vision.

Then there are the Instagram posts, which range wildly in content and color scheme. There are several posts of pastel clothing and imagery, while the most random post, a photo of baby chicks wearing sunglasses, has left even the most ardent conspiracy theorist scratching his head. Each of these posts come with the hashtag #426, further building up the anticipation (and the mystery) behind the single.

It Is the Lead Single from Her Anticipated 7th Album

Swift recently talked about her creative process, and how her songwriting will continue to have a personal edge. “The writing I love the most places you into that story, that room, that rain soaked kiss. You can smell the air, hear the sounds, and feel your heart race as the character’s does,” she told Elle UK. “It’s something F. Scott Fitzgerald did so well, to describe a scene so gorgeously interwoven with rich emotional revelations, that you yourself have escaped from your own life for a moment.”

“I love writing songs because I love preserving memories, like putting a picture frame around a feeling you once had,” she added. “I like to use nostalgia as inspiration when I’m writing songs for the same reason I like to take photographs. I like to be able to remember the extremely good and extremely bad times.” 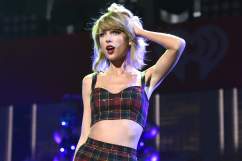 How to Stream Taylor Swift’s New Single ‘ME!’