Larissa Dos Santos Lima is known as the fiery wife of Colt Johnson on 90 Day Fiance, but since filming she and Johnson have gotten divorced. While some may know her as a reality star, there are a couple of people who know her as their mother. On tonight’s episode of 90 Day Fiance, Johnson speaks with Lima about visiting her family back in Brazil. He also said that she doesn’t talk to him much about her family. In addition, according to E! News, Lima comes clean to Johnson’s mother, Debbie, who didn’t know her daughter-in-law had kids. Lima admits to Debbie that she left her children behind in Brazil to marry Johnson and live in America.

Lima reportedly has two kids, with a daughter currently living with her aunt and her son who lives with his father.

Soap Dirt reported that Lima has taken a lot of heat from viewers on social media for leaving her children in Brazil. But, when she started receiving criticism from fans, in November 2018, In Touch Weekly reported that Lima spoke out about the situation with her children, saying, “I really did not want to talk about them, because they are young and they can’t make choices yet, I don’t know if they wanted to be exposed or not. But, once I am really tired of all these rumors and in respect to my followers, I will make a brief about what happened in my past.”

She also talked about her baby daddy problems, explaining, “We lived together for (two) years and had a son, the relationship did not (work) out, we had a very bad (break) up. Once the father was not paying child support and my family were not talking to me, I found myself, financially and emotionally unable to take care of my son. I spent all my savings and I tried everything to find a job, but in Brazil, as everyone knows, life can be very hard sometimes. For this reason, I decided to let his aunt adopt him, she was always there for me and she loved him very much. This decision still breaks my heart today and it is a very delicate matter to me.” 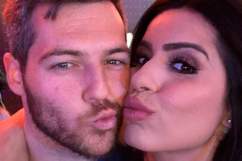 Lima continued, “It is a regret that I have to live with and I don’t need anyone point the finger on my face. I already suffered enough. I really hope I can reconnect with him one day when he is old enough to understand that I made the best decision I could.”

Lima then talked about her younger child, her little girl, and the relationship surrounding her daughter. She revealed, “I always (took) care of her and now she is with my father in Brazil temporarily. My father is a retired military man and he and his wife are great-grandparents, they have a lot of time for her, I talk to them every day on WhatsApp and I plan to bring her to live with us very soon. I wanted to try my life here with Colt first, I want to move to a ‘biggie house’ and make sure the relationship will work out before I bring her. I also want to open my business to be able to support my daughter.” Lima’s daughter reportedly now lives with her aunt, as previously stated above.

When it comes to recent comments that Lima has made about her children, she wrote on her Instagram story, “Hi everyone, I would like to address something about my kids,” Larissa, 31, wrote in her Instagram statement. “My kids will only be addressed with my family, my boyfriend, and my closest friends.”