One of the traditions of Bachelor in Paradise is that successful couples sometimes return to get married on the show. For the 2019 season, Krystal Nielson and Chris Randone, who got engaged on the show last season, have their wedding in Paradise, with the cast members and several alumni on the guest list.

Last summer, Randone was starting to pursue a relationship with Tia Booth on BIP, but Nielson had her sights set on Randone and he gave in to temptation, which evolved into love. Prior to their season of BIP airing, Randone gushed about Nielson, who was previously known as a villain from The Bachelor. In an interview with Entertainment Tonight, Randone said that “She’s actually a beautiful person and I’m really excited to have America see that as well. I don’t know if it’s [about] redemption stories, but I think [Paradise] just has the ability to see people in areas of who they are and give people an idea of kind of who we are in real life.”

Randone and Nielson went on to celebrate their relationship outside of Paradise and returned to Mexico a year later for their wedding.

LOVE THIS PIC!! ??? We were so lucky to return to the spot of our first date together @Vidanta for our wedding! ? Perfect venue, perfect sunset for our first night as husband and wife! #BachelorInParadise #glittergoosewedding ✨? #krystalgetsgoosed Photo Credit: WB/ @crisbernalphoto

Nielson and Randone’s wedding almost didn’t happen, according to Entertainment Tonight. Randone revealed that in December 2018, the two came very close to breaking up. He explained, “It’s one of those things where it’s like an earthquake, the plate tectonics, so out of place, everything was shaking. We finally dug deep and had these deep-rooted conversations that finally allowed us to feel stable and that allowed us to go ahead and really identify the importance of understanding one another. We were both having issues in ourselves that we just needed to work on it and come together as one.”

Fortunately for fans, the two were able to repair their relationship.

What Almost Ruined the Wedding

Grateful and honored to be accompanied by some of the greatest guys in the world and my boys have never looked better thanks to @theblacktux hooking them up. We’re 4 days away from our special night #krystalgetsgoosed #glittergoosewedding #bachelorinparadise

Even though Nielson and Randone had a beautiful wedding, they told Access Hollywood that they are not fans of current BIP cast member John Paul Jones, who got into a fight with Derek Peth at the wedding, just after Randone and Nielson exchanged their vows. Randone said he’s not a fan of JPJ and Nielson said her family members told her he put a “dark cloud” over the event.

Some of the familiar faces in attendance at the wedding aside from this season’s BIP cast members included Bachelor and Bachelorette alumni Becca Kufrin, Jared Haibon, Ashley Iaconetti, and Ben Higgins. Iaconetti and Haibon, who got engaged last season on BIP, also recently got married. The nuptials took place at the Vidanta resort in Nuevo Vallarta in June 2019.

We’re so excited to be able to finally be able to share our incredible wedding with #BachelorNation! ??Thank you to the incredible @NeilLaneJewelry for our one of a kind wedding bands! ? Tune in on Tuesday at 8PM on @ABCnetwork to see these beautiful rings and more! ?✨ #BachelorInParadise ? #krystalgetsgoosed ? ? #glittergoosewedding ✨? Photo Credit: WB/ @crisbernalphoto

Since tying the knot in Paradise, Randone and Nielson spoke about married life together to Us Weekly. Randone said, “Married life is great, we feel a lot more stable now knowing that we kind of have accomplished this chapter of putting a ring on one another. And honestly there’s just been a lot of growth lately within the relationship and just a lot of great moments and we’re just really happy for what’s next.” Nielson then chimed in, saying, “[It] feels so comforting and peaceful and I feel so supported and like I don’t have to be so strong and independent because my husband has my back and we’re a team. It’s such an incredible feeling.”

So, what’s next for the newlyweds? People has reported that Nielson and Randone say they are ready to have a baby. Nielson admitted to Entertainment Tonight that she has gotten off her birth control and, “We’re talking about the beginning of the year, starting to try for a family … Truly what we’re doing through the end of the year is a full cleanse of the mind, body, and spirit, just getting ready for the next chapter.” 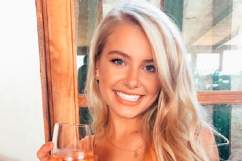