While every member of the Losers Club manage to survive IT: Chapter 1, they are not so lucky in Chapter 2. Some of them are unable to cope with the return of Pennywise, while others lose their lives in the battle to destroy him. But which characters die? Which members of the Losers Club survive?

Beware of spoilers below and STOP READING if you do not want to know what happens to the Losers Club in IT: Chapter 2.

There are two members of the Losers Club who die in IT: Chapter 2. The first of these characters is Stanley Uris (Andy Bean). 27 years after the Losers Club defeated Pennywise, Mike Hanlon contacts them and invites them back to Derry to face down the sinister clown again. Each of them heed the call, except for Stanley, who is overcome with crippling fear. Instead of dealing with Pennywise a second time, he chooses to take his own life.

Stanley’s death was actually foreshadowed in IT: Chapter 1. At the end of the film, the Losers Club make a blood pact to return to Derry and destroy Pennywise if he ever returns. They all hold hands and form a circle, but Stanley is the first character to break the circle and say goodbye. The fact that he was the one who broke off hints at his untimely and tragic demise.

Stanley Uris Is the First Member of the Losers Club to Die In ‘IT: Chapter 2’

The second character to die in IT: Chapter 2 is Eddie Kaspbrack (James Ransone). Despite the fact that Eddie returns to Derry, he gets attacked by Pennywise in the climactic battle and dies as a result of his injuries. The character’s demise was hinted at in the first official trailer, which shows the adults Losers Club looking at a storefront window that displays a reflection of their younger selves.

Each member is accounted for, except for Stanley and, you guessed it, Eddie. Like Stanley, Eddie’s death was foreshadowed in Chapter 1. He is the second member of the Losers Club to break the circle, which cleverly sets up the fact that he will be the second to die.

Eddie Kaspbrack Also Dies During the Climactic Battle with Pennywise

You don’t want to miss IT. Get tickets now at the link in bio. #ITMovie

Another character who will die in IT: Chapter 2 is Adrian Mellon (Xavier Dolan). Adrian is a gay man who gets beaten up by a group of homophobes, and who gets pushed over a bridge in front of his boyfriend. Once over the bridge, he is gobbled up in gruesome fashion by Pennywise. The incident was inspired by the real-life death of Charlie Howard, and director Andy Muschietti told io9 that the controversial scene would be included in the film.

“It’s one of the things that really caused a deep impact on Stephen King when he was writing It. So, he decided to include it,” Muschietti explained. “Of course, the names are changed, but the beating happened almost exactly like it’s described in the book, and Charlie died in three feet of water in the canal.” The director went a step further, and depicted Adrian as an asthmatic, to mirror the real-life inspiration for the character. 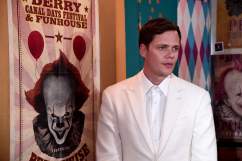 How Does Pennywise Die In ‘IT: Chapter 2’?

Read More
Horror, Movies, Stephen King
Find out which characters die and which survive in the final chapter of the Pennywise saga, 'IT: Chapter 2.'