The Fox performs for the second time on season 2 of The Masked Singer tonight, along with the Rottweiler, Penguin, and Ladybug. There have been several theories as to who the Fox could be under the mask, but a name that seems to rise above the rest is comedian Wayne Brady. Read on below for the spoilers, clues, and guesses surrounding the Fox, and whether or not the Brady theory carries weight.

The Fox’s clue package opened with him reading a bedtime story to a little Fox, which suggests that the hidden celebrity works with (or has) children. The Fox then dropped a few hints about his identity, telling the audience: “I’ve definitely done my best work at night. I’ve dabbled in many different genres… [and] over the years, I’ve lived two different lives.” The Fox adds that he has a “superhero” persona, which is supported by the cartoonish, comic book feel of the entire package.

Can you decipher the #FoxMask clues? ? #TheMaskedSinger

Fans have been to quick to point out that Brady fits all of the clues provided thus far. He has a child of his own, a daughter named Maile, which could tie into the bedtime story scene, and he hosts a nighttime television show (Whose Line Is It Anyway?), which aligns with the claim that he “does his best work at night.” Brady is also known for his versatility, having dabbled in comedy, stage productions, and sitcom television throughout his career. He most certainly fits the bill of having “dabbled in many different genres.”

Brady has also proven adept at singing. He previously hosted the game show Don’t Forget the Lyrics! and has shown off his vocal range in a number of different arenas. He has been described as a “triple threat,” in that he can sing, act, and perform comedy, which makes him an ideal candidate for who’s behind the Fox’s charismatic presence. It’s no stretch to imagine Brady giving the knockout rendition of “This Love” by Maroon 5, which is precisely what the Fox did during his inaugural performance. The judges were so impressed with the Fox’s vocal talents that they immediately determined he was a “seasoned entertainer.” Brady anyone?

Thank you @origamigirl1 for this @freestylelovesupreme Playbill necklace! I def feel like part of the team rocking the FLS colors and you took such great care and time. Thank you!

This is not the first time that Brady has been mentioned in connection to a Masked Singer contestant. Early on in season two, fans speculated that Brady might be the man underneath the Thingamajig costume. The clues regarding the seemed to match up with the comedian, and his Twitter bio had fans assuming that it was a major clue: “Guy who makes stuff up, pretends to be other people, and sings.” Despite the compelling evidence, Thingamajig’s second clue package seemed to hint at an NBA connection, which promptly ruled Brady out as the favorite.

All that said, there are those who feel that Brady doesn’t fit the mold as well as others. There has not been a connection made between Brady and the clue about having “a superhero persona,” which is admittedly a big part of the Fox’s image. For this reason, fans have thrown out actors like Jeremy Renner and Anthony Mackie, both of whom has become famous for playing superheroes on the big screen.

Tune into tonight’s episode of The Masked Singer to learn more info on the Fox and possibly see him get unmasked! 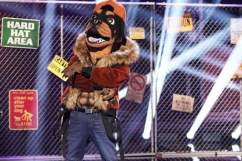 Rottweiler on ‘The Masked Singer’: 5 Fast Facts You Need to Know

Read More
FOX, Reality TV, TV, Wayne Brady
There are many fans who believe that comedian Wayne Brady is the Fox on 'The Masked Singer.' Find out why.