Harry Styles has a lengthy history of dating models and other celebrities. The pop star has been romantically linked to everyone from Kendall Jenner and Camilla Rowe to Taylor Swift, so naturally fans are curious as to whether he’s dating someone now.  Is Styles in a relationship today? Or is he single?

Styles has not made the details of his personal life available to fans, but it is rumored that he’s dating Japanese-American model Kiko Mizuhara. The alleged couple started following each other on Instagram back in January 2019, and Daily Mail reports that Styles has spent most of the year jet-setting back and forth to Tokyo, so that he can spend time with Mizuhara.

ADORE YOU. OUT NOW. Link in Bio.

Mizuhara, 28, was born in Dallas, Texas and raised in Japan. She has over 5 million followers on Instagram and is a brand ambassador for Christian Dior, as well as being the face of Coach’s Spring Collection. In addition to her modeling gigs, Mizuhara has worked on a collaboration with the clothing brand Opening Ceremony, and her designs have been worn by international celebrities like Rihanna and Beyoncé.

Neither Styles nor Mizuhara have publicly spoken about their relationship, and the couple has yet to make their relationship official on Instagram. In fact, Styles hasn’t posted a photo on the social media site since 2018. That said, Styles has made it clear that he prefers to keep his love life under wraps, as he told the Kyle and Jackie O Show.

The Celebs Have Been Romantically Linked Since January 2019

“For me, it’s very much about—I like to split the two in terms of working and not working,” he explained. “I’m definitely aware that a lot of working life can be extraordinary at times and isn’t kind of the average thing, and then with my personal life, it’s kind of—I’d say it’s pretty normal.” When asked whether he has “women rolling in and out” of his home, Styles said, “No, I just don’t do that, I’m sorry.”

That said, fans looking for details about Styles’ relationship with Mizuhara may find solace in his album Fine Line. The pop star revealed that the album is all about “having sex and feeling sad,” and told Beats 1 that he felt compelled to put his emotions front-and-center.

Neither Styles Nor Mizuhara Have Publicly Spoken About Their Relationship

“Making an album, I feel like is the most self-indulgent time you can think of, really,” Styles admitted. “Because you’re just like, ‘How do I feel about this?’ I think with the therapy thing, I just realized I was just getting in my own way. It’s been a thing where I’ve definitely felt it have an impact on my life.”

Styles also revealed that the track “Cherry” will deal with the split between him and his last girlfriend, Camilla Rowe. “The times when I felt good and I felt happy were the happiest I’ve ever felt in my life,” he said. “And the times when I felt sad was the lowest I’ve ever felt in my life. And I think it was that feeling of when you can feel yourself falling back into one of those moments where you’re there.” 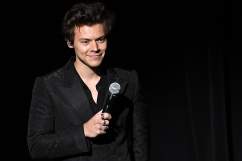