Sally Field is one of the most respected actresses of all time. She has appeared in a string of successful films dating back to the 1960s, and tonight, she is being honored by the Kennedy Center for her contributions to American cinema and culture.

Field, 73, has been romantically linked to a number of male celebrities throughout her career. These celebrities include Davy Jones, Kevin Kline, and her Smokey and the Bandit co-star Burt Reynolds. Read on to learn more about Field’s love life and her dating history.

1. She Dated Actor Pete Duel While They  Shooting ABC’s ‘Gidget’

Field met actor Pete Duel while they were filming the ABC sitcom Gidget. Duel recounted his experiences with Field in the book Complicated, Simple Me, where he praised the actress’ authenticity. “I never met Sally before we started filming Gidget. She hadn’t been in the business until then,” he said. “All I really knew was that she was a sweet little thing. And she really is, but Sally is much more than that too.”

The couple had a couple of dates while the sitcom was on the air in 1965-66. “We went to one hockey game while we were working together on Gidget,” Duel recalled. “Our first big date, I guess you’d call it. Sally was involved in it officially… and quite frank with a man, which I found extremely pleasant.” They also attended a charity ball together in 1967, but their relationship was largely over by that point.

Duel was found dead on December 31, 1971 at his estate in the Hollywood Hills. Police said that his friends and family felt he was depressed about his drinking problem, and ruled his death a suicide. He was 31. “I’m sure I’m not the only one in the world who wishes he hadn’t done that,” Field said in a retrospective interview. “He was a tremendously gifted actor.”

Field and Davy Jones were both fixtures on ABC during the 1960s. The former was a star on The Flying Nun, and the latter was globally known as the lead singer of The Monkees on record and television. Field said that she first met Jones when he crowned the winner of the Miss Teen International Pageant at the Hollywood Palladium, but didn’t get a chance to connect with him until months later on the ABC lot.

“When I saw Davy at the studio I thought he was so neat,” she told Monkee Spectacular Magazine. “What’s great is that when we got talking, I found we had the same sense of humor. We laugh all the time and just goof around.” In Field’s biography In Pieces, she recounted an instance where Jones made a sexual comment towards her, and she played along, not knowing what the comment actually meant.

Despite the awkward interaction, Field and Jones dated for several months in 1968. The latter told People Magazine that their relationship was more friendship-based than anything else. “I dated Sally Field. I never had sex with Sally; we just sat and talked a lot,” he revealed. “With her, it was all clean living, holding hands, kissing and gentle behavior.” Jones died on February 29, 2012. He was 66.

3. Field ‘s Most Famous Relationship Was with Actor Burt Reynolds

Field’s most famous relationship was with actor Burt Reynolds. The couple met while filming the 1977 classic Smokey and Bandit, and they quickly struck up a romance on set. They went on to make three more hits together, including Smokey and the Bandit II, Hooper and The End, but their love life was more complicated than their onscreen counterparts.

Reynolds proposed to Field on numerous occasions and longed to start a family with her, but the actress was reluctant to do so. Field later told Vanity Fair that Reynolds was controlling and often times during stretches of their relationship. “[Burt] was confusing and complicated, and not without loving and caring, but really complicated and hurtful to me,” she said.

“By the time we met, the weight of his stardom had become a way for Burt to control everyone around him, and from the moment I walked through the door, it was a way to control me,” Field added. “We were a perfect match of flaws.” The couple split in 1981.

Reynolds considered Field to be the “love of his life,” and publicly admitted to driving her away. “I don’t know why I was so stupid,” he said in 2015. “Men are like that, you know. You find the perfect person, and then you do everything you can to screw it up.’” Reynolds died on September 6, 2018, and Field was one of the first celebrities to issue a statement.

Parade reports that Field and actor Kevin Kline went on a handful of dates in 1982. Nothing came out of the union, as Field was still rebounding from her split with Reynolds, but the couple got along well enough to play ex-lovers in the 1991 comedy Soapdish.

In 1984, Field told People that going on dates with the likes of Kline and Johnny Carson was enjoyable, but that she reached a point where she wanted to settle down with someone. She credited her shifting worldview to Edna, the character she played in the film Places In the Heart.

“For the past four years I found myself being the kind of person who said, ‘I don’t want anybody. I don’t need anybody.’ I was sort of chanting that subconsciously to myself, like the little engine that could.” she admitted. “Edna opened me up. I found that people are meant to need one another. I’ve spent most of my life saying ‘Oh, no they’re not!’ ”

Field went on to marry film producer Alan Greisman in 1984, and they stayed together for a decade.

5. Field Is Currently Single But Is Still Open to Dating

With a career spanning more than five decades, Sally Field is a two-time Academy Award winner and three-time Emmy Award winner. Tune in to CBS tonight at 8/7c as she is honored at the @KennedyCenter Honors. #sallyfield #kchonors

Field has not been in a public relationship since her divorce from Greisman in 1994. That said, she has not ruled out the possibility of finding love or going on dates. “I’m open to [dating], but I’m such a hermit,” she told People in 2016. “Unless they came to the door selling Bibles …”

“If I knew anyone I wanted to be with, I would hope I would have the gumption to bang on his door,” Field admitted. “I just don’t know who that is. I am totally fulfilled. That doesn’t mean I would [rule] anything out, but I wouldn’t dress up and go roaming the streets looking for it.”

Field joked that her sons; Peter Craig, Eli Craig, and Samuel Greisman, have gone out of their way to make sure she stays single. “As a matter of fact, my sons were always the ones standing at the door saying, ‘She’s not here!'” 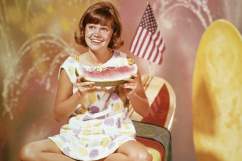 Top 5 Photos of Sally Field In Her Younger Years