Pat Morita was a Japanese- American actor best known for his role as Mr. Miyagi in the original Karate Kid movie franchise.

His road to fame was not a fast one, and it took him a while to amass his fortune.

He once told the Chicago Tribune that his showbusiness career came “out of left field” after he fumbled through his twenties.

”When I was 27 or 28 I said, `Okay, what are you going to do? You have no college degree, you can`t even spell scholarship,'” he said. ‘Somehow, I thought of show business, even though I couldn`t act, sing or dance. But I knew I could talk and tell stories and jokes.”

Pat Morita died in 2005 at age 73 after more than 40 years in the entertainment business.

1. Pat Morita’s Net Worth Was $5 Million 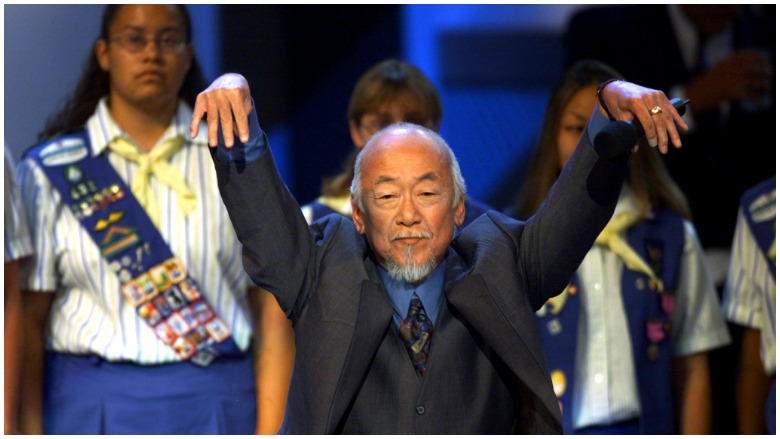 Morita had a net worth of $5 million dollars, according to Celebrity Net Worth.  But his fortune did not come until he was in his 50s.

When he was younger, Morita worked at his family’s Sacramento restaurant,  according to the New York Times.  The future actor sometimes performed comedy for patrons of the eatery.

He temporarily put his dreams for an entertainment career on hold and found work in the computer field at Aerojet General. He set his sights on a full-time career in show business at age 30.

2. Morita Struggled as a Stand-Up Comedian Early in His Career & Once Got  a $3500 Loan From His Mentor, Redd Foxx, So He Could Buy a House 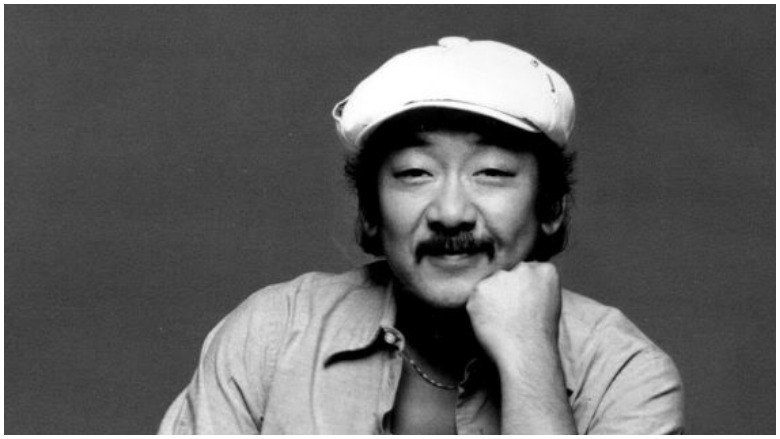 One of Morita’s comedy mentors was actor-comedian Redd Foxx. After struggling as a stand-up comic for years, Morita scored a recurring role as Ah Chew in Foxx’s 1970s sitcom, Sanford and Son.

In an interview with Emmy TV legends, Morita revealed that he once went to Foxx and asked him to help him with $3500 he need to close on a house purchase.

Morita revealed that Foxx called his assistant to bring his checkbook, then told him it wasn’t a loan and that he should just pay it forward someday.

“I know you’re gonna make it someday….you do this for somebody,” Foxx told Morita.

3. He Earned Steady Paychecks for a Series of TV Shows Including Wisecracking Malt Shop Owner Arnold on ‘Happy Days’ 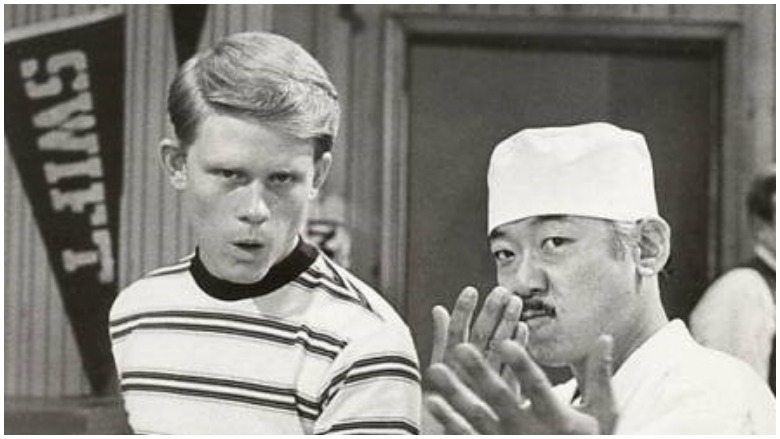 Morita built an impressive sitcom resume in the 1970s. In addition to Sanford and Son, he appeared as wacky malt shop owner Arnold Takahashi for 26 episodes in the hit ABC comedy, Happy Days, which spawned into a role in the spinoff series Blanksy’s Beauties, according to IMDB.

Morita also starred in the short-lived ABC sitcom Mr. T and Tina. He also scored guest roles on Laverne & Shirley, Chico and the Man, and more popular shows of the era.

4. His Clout Skyrocketed After the Success of ‘The Karate Kid’ & He Got a Raise for ‘Karate Kid 2’

Morita’s biggest break came in 1984 when he starred as Mr. Miyagi in The Karate Kid movie franchise. The role earned him a Best Supporting Actor Academy Award nomination in 1984. The highly successful film also scored a sequel with a much bigger budget.

″The difference in costs between the two pictures is also because everyone’s salary went up,″ producer John Avildsen told the Associated Press.

Morita once said of his Karate Kid success: ″My bills got paid, my kids’ education was partially provided for and now my wife says she loves me in public…. No, I shouldn’t say that.″

5. Pat Morita Measured His Wealth by More Than Just Money 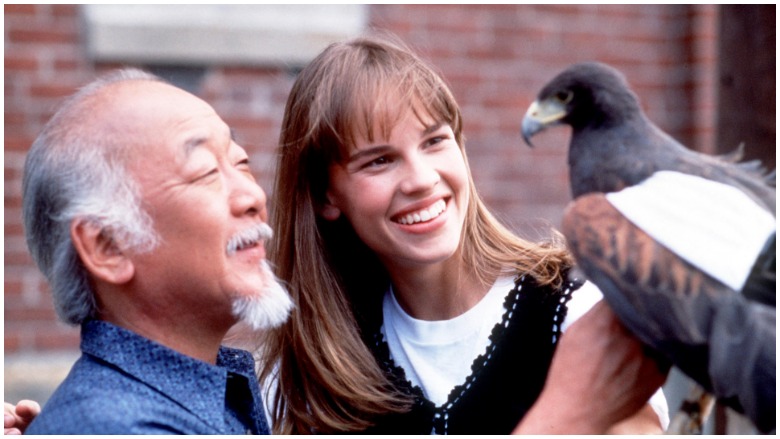 Getty1994 Noriyuki “Pat” Morita As Mr. Miyagi And Hilary Swank As Julie Pierce In The Next Karate Kid.

In a 1989 interview with the Chicago Tribune, Morita talked about reprising his role as Mr. Miyagi in three Karate Kid films.

While he admitted that the third movie, The Karate Kid Part III, was “more of the same… a  lot of the same,” the role paved the way for even more TV and movie offers as well as a lucrative big brand deal with Colgate. But he also appreciated the other rewards his fame brought him.

“The rewards have been immense,” Morita said. ”And I don`t mean just monetarily. I`ve just been places I`ve never imagined.”

He explained that his early life was marred by tragedy after he was diagnosed with spinal tuberculosis and was hospitalized and unable to walk for nine years.

”My early life was constantly, for years on end, tinged with sadness,” he said in the interview. “But fortunately, I was always a great dreamer … There`s a lot of scars from those times, but at this point in my life I am extremely grateful. And while I still aspire to levels of artistic endeavor, right now I am a very happy man.”

Loading more stories
wpDiscuz
0
0
Would love your thoughts, please comment.x
()
x
| Reply
Pat Morita was a wealthy man thanks to his role in 'The Karate Kid.'