Joey Fatone opened up on “The Wendy Williams Show.” The NSYNC member sat down with Wendy Williams to give an update on his life, and as usual, the inquisitive talk show host got personal.

Fatone told Williams that he’s not offended over still being known for his days in the boy band and he detailed handing out with Justin Timberlake and Britney Spears when the two were dating during NSYNC’s early days. Fatone also denounced rumors that he once dated fellow pop singer, Pink. The “Bye Bye Bye” singer revealed that when Pink was just starting out he met up with her up through a manager and he invited her to go out to Friendly’s for ice cream when she was in Orlando.  Fatone clarified that the outing was not a date.

In the interview, Fatone also embraced his longtime nickname and gave the scoop on his thicker-than-ever hair. 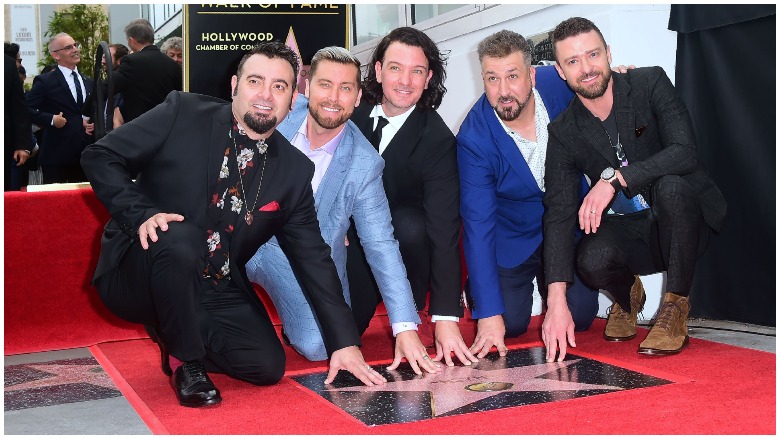 Getty)Members of the iconic 90’s boyband *NSYNC pose on their Hollywood Walk of Fame Star in Hollywood, California on April 30, 2018, where Chris Kirkpatrick,Lance Bass, JC Chasez, Joey Fatone and Justin Timberlake, received the 2,636th Star in the category of Recording.

During the interview, Williams noted that Fatone has long had a nickname and reputation for being the “fat one” in the band, and asked him if the moniker bothered him. The singer revealed that “Fat One” been his name since he was a child.

“My last name is F-A-T-O-N-E,” the onetime “Dancing With the Stars” runner-up said. “So that was the joke even when I was skinny as a rail in middle school and high school. They’d call me Fat One. But it was more of an endearing thing, not making fun of.”

Fatone has long played up his Fat One name. In 2016, he opened Fat One’s Hot Dogs & Italian Ice at the Florida Mall in Orlando, according to Billboard. The mall was the same shopping center he roamed as a kid while being called “Fat One” by his friends.

“It’s so funny, you gotta make fun of yourself,” Fatone told Orlando Weekly of his eatery’s name. “It’s just the way it is. I’ve always been called the ‘fat one.’”

No topic was off-limits on Williams’ show.  The outspoken host point-blank asked Fatone if he was still doing hair plug treatments, and he happily dished on the situation.

“This is my hair,” he said. “This is it. There’s no fillers.” He added that women get breast implants and augmentations and he gets hair plugs. Fatone revealed that he’s had two full hair implant treatments.

Fatone has been vocal about his thinning hair and advanced baldness for nearly a decade. In 2013 he even starred in an infomercial for Bosley hair restoration treatments, per People.  In the ad, the singer-turned-spokesman detailed a special restoration procedure involving hair transplants and showed off before and after photos of his impressive mane.

“There’s a side of me that most people weren’t aware of. You know why people don’t know me like this? Bosley,” he said.