Johnny Depp stepped into the spotlight for the first time since the verdict in his defamation case against Amber Heard by playing the famed MTV “Moonman” during the 2022 MTV Video Music Awards on Sunday, August 28, 2022.

Depp appeared in a pre-recorded video at the VMAs after rumors spread about the possibility the post-trial moment would take place during the award show. The “Moonman” statue has been a symbol of MTV’s award show since its debut in 1984. While Depp’s name wasn’t said, his face could be seen in a spacesuit hanging above the stage at the awards show after the announcer listed the presenters and hosts. Depp introduced LL Cool J, who was co-hosting the VMAs with Jack Harlow and Nicki Minaj.

Depp’s appearance can be seen below:

Johnny Depp appearing as a Moon Person 🌕 at the #VMAs (we talked about the rumours surrounding this, we were totally right) #WitherReport🌦 pic.twitter.com/aTLb4bFwXa

Depp said during the segment, “I needed the work.”

@JohnnyDeppNFT #johnnydepp as the moon man “I needed to work”! pic.twitter.com/dGJuXrXUYo

The brief appearance left viewers questioning if that was actually Depp:

I'm sorry, did the VMAs just have a surprise appearance by JOHNNY DEPP saying "I needed the work?" 🤮 pic.twitter.com/sVwxY6OffL

Was that it? That better not be it #VMAs #JohnnyDepp #JohnnyDeppRisesVMA pic.twitter.com/vAQdA7s6Xz

Depp posted on Instagram about the appearance, “guess who? #VMAs.”

The video posted to Instagram by Depp includes an unaired clip of him saying, “I just want you guys to know that I’m available for birthdays, bar mitzvahs, bat mitzvahs, weddings, wakes, any old thing you need.”

TMZ first reported that Depp’s team was in talks with VMAs producers about a possible appearance on the award show. According to TMZ, “VMA production sources tell TMZ … Depp’s been in talks with show producers to dress up as the network’s famous Moonman … and show face at some point during the award show’s broadcast on August 28.”

According to The New York Post, the plans called for Depp to dress up in a silver costume in a pre-recorded video. The newspaper wrote, “Jack Sparrow’s team declined to comment when The Post reached out, but our insider said the actor is indeed locked in to appear via video.”

The Post noted that Depp has been on tour with Jeff Beck’s band in Europe, but has not appeared on TV or elsewhere in the media since the July verdict in the Depp-Heard trial. After a trial that lasted two months, a jury in Virginia found Heard defamed Depp and ordered her to pay more than $10 million in damages, a ruling her legal team is appealing. The jury also found one of Depp’s lawyers defamed Heard, awarding her $2 million in damages in her countersuit.

Depp Has Been Making a ‘Comeback’ After the Defamation Case Verdict 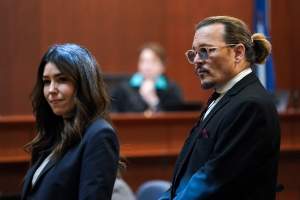 GettyJohnny Depp stands next to his lawyer Camille Vasquez after a break in the defamation trial against ex-wife Amber Heard at the Fairfax County Circuit Courthouse in Fairfax, Virginia, on May 18, 2022.

A source told The Post that Depp was “really excited” to make the appearance at the MTV VMAs and is “ready for his comeback.” In the weeks after the verdict in the defamation trial, Depp has been slowly working his way back into roles he previously occupied and solidifying his celebrity status.

Deadline reported Depp will appear in his first feature film in three years, ” “Jeanne du Barry,” which is being produced by France’s Why Not Productions. The movie began shooting in late July. Depp will star as King Louis XV in the “historical love story,” according to Deadline.

Depp is also directing a movie that is being co-produced by Al Pacino, according to The Hollywood Reporter. “A quarter of a century after he directed both himself and Marlon Brando in 1997’s The Brave, his feature directorial debut, Depp is set to get behind the camera for Modigliani, about Italian artist Amedeo Modigliani, and will co-produce alongside Al Pacino and Barry Navidi,” the site reported on August 15.

TMZ reported on August 9 that Depp had signed a new multi-year deal worth seven figures with Dior to be the face of the company’s Sauvage scent for men. “We’re told the deal recently came together, and was cemented after Dior honchos and famous fashion photog Greg Williams attended one of Johnny and Jeff Beck’s rock concerts in Paris as a show of support for JD,” TMZ wrote. “Our sources say Johnny did a photo shoot with Greg before and after the Paris show, and the content will be used in a new Dior advertising campaign.”