Wendy Williams’ new Lifetime biopic, Wendy Williams: The Movie, and the accompanying tell-all documentary, What a Mess!,  told all about the talk show host’s personal life with her ex-husband, Kevin Hunter.

The former couple’s son, Kevin Hunter Jr., also made a cameo, but viewers learned little about their only child.

While Hunter Jr. has had a rocky relationship with his father — he pleaded not guilty in June 2019 to charges that he assaulted Hunter Sr. by punching him in the nose during an argument, according to TMZ — he is close with his famous mother.

Here’s what you need to know about Wendy Williams’ 20-year-old son:

In 2015, Williams talked about her difficulty getting pregnant and the devastating toll of numerous miscarriages on the PBS special American Masters: The Women’s List. “I fought tooth and nail to be a mother. I suffered several miscarriages, including two at five months. that’s when you have the clothes already picked out, the nursery is already painted. They ask you do you want a funeral or do you want the cremation,” she said in the special, as Essence reported at the time. “So our Kevin is a hard-won child.”

While Hunter Jr. lives a mostly under-the-radar life, he has appeared in public with his mom, most notably at her Hollywood Walk of Fame dedication in 2019, where they posed together for photos. His famous mother has also talked about him on The Wendy Williams Show over the years.

In 2015, Williams told her viewers that her then 15-year-old son had become addicted to K2, a synthetic marijuana. Williams told Entertainment Tonight that the drug had her son walking around like a “zombie” and that he became someone she “didn’t even know.”

“I’m glad to say we were able to bring him back all the way around,” she said.

In more recent years, Williams found herself opening up to her son about his father’s long-term affair with Sharina Hudson, which resulted in the birth of a baby girl, Journey.

In an interview with E! News’ Daily Pop, the protective mom explained that she kept quiet about Hunter’s affairs when her son was young.

“There were secrets that I was keeping,” Williams explained. “I could not talk … about everything going on until I was able to sit down and talk with my son.”

In August 2020, the proud mom marked her son’s 20th birthday by posting some unusual mementos from his childhood. On Instagram, she shared a photo of “remains of his 1st hair cut” and her cervical stitch from her pregnancy, among photos and other items.

“He’s in Miami and I’m in NYC, but love never stops,” she wrote. She added that she doesn’t like cake, but for her son’s birthday she would indulge. 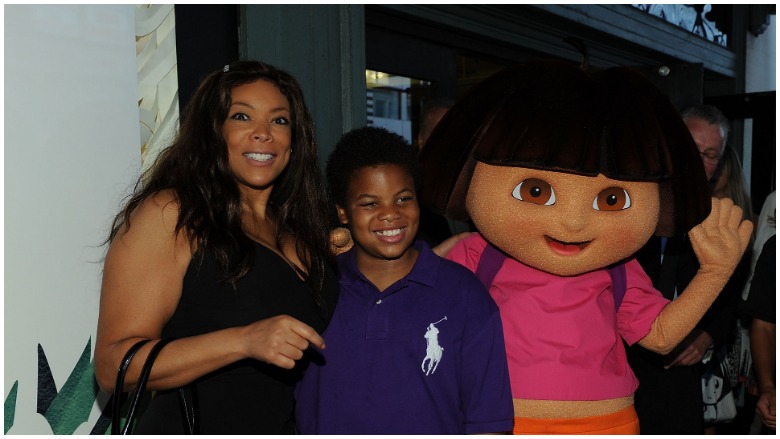 In 2018, Williams told Cosmopolitan that despite his teen troubles, her son graduated from high school with high marks and had his sights set on helping others.

“He’s graduated from high school with honors, he’s going to college in August,” she said at the time. “He’s a businessman. He does things. He wants to be an example for people as well regarding substance abuse.”

Williams’ son attends college in Miami, according to Page Six.

The talk show queen did not give details on what her son is studying at his college or what type of career he hopes to eventually pursue. She told Cosmopolitan that she tries to keep life “as normal as possible” for her son.