Bethesda Softworks knows what gamers crave, especially the ones that can’t get enough of today’s batch of first-person shooters. This highly lauded video game publishing team is sure to make those analog stick twiddlers giddy with joy with the announcement of Wolfenstein: The New Order.

The trailer above should build the anticipation within your gaming soul.

Check out the official description of the game below, which comes courtesy of the YouTube announcement trailer:

The year is 1960 and the Nazi’s have won World War II. War hero B.J. Blazkowicz must launch an impossible counter-offensive against the monstrous Nazi regime that has conquered the globe.

Intense, cinematic and rendered in stunning detail with id® Software’s id Tech® 5 engine, Wolfenstein sends players across Europe on a mission to bring down the Nazi war machine. Infiltrate their most heavily guarded facilities, battle high-tech Nazi legions, and take control of super-weapons that have conquered the earth — and beyond. Wolfenstein is under development at MachineGames, a studio comprised of a seasoned group of developers recognized for their work creating award-winning games.

Wolfenstein: The New Order is scheduled for release in Q4 2013 on Xbox 360, PlayStation 3, PC, and next generation consoles. And Beginning today, additional details about the game will be revealed in a series of exclusive feature stories with Gamespot.com.

Wolfenstein®: The New Order™ is a fictional story set in an alternate universe in the 1960’s. Names, characters, organizations, locations and events are either imaginary or depicted in a fictionalized manner. The story and contents of this game are not intended to and should not be construed in any way to condone, glorify or endorse the beliefs, ideologies, events, actions, persons or behavior of the Nazi regime or to trivialize its war crimes, genocide and other crimes against humanity.

Gamespot was lucky enough to get an exclsuive interview with the developers behind the game.

That awesome piece of footage can be seen above.

This latest take on the Wolfenstein property is being developed by the team at MachineGames and is being prepped for a release in late 2013. The PS3, Xbox 360, and the PC will play host to this new FPS. The next offering of next-gen consoles will also feature the game.

Jens Matthies, the creative director at MachineGames, spoke to USA Today about the dev team’s feeling towards working on a new game in the series:

As fans of the series, working on this game is an honor, and our team is driven to create an unforgettable action-adventure experience that will make FPS fans proud.

The Facebook and Twitter pages are already up, so check them out for extra info as they come. 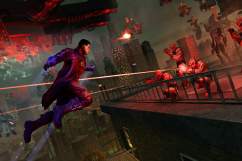