Dungeons & Dragons: Chronicles of Mystara is a traditional beat ’em up game, but it stands apart from you usual host of games in the genre by incorporating a decent plot. You’ll make your way across your usual array of fantasy/medieval-inspired environments as you and your three other co-op partners traverse the world.

Both games in this downloadable package, Tower of Doom and Shadow of Mystara, incorporate a type of choose-you-own adventure template that helps develop one’s own narrative. The game also entails the use of still animated images that stand in for the FMV’s and story sequences. The story for both games are simple and, for a beat ’em up game, that’s how it should be.

The visuals for both games actually hold up pretty well after their initial introduction to gamers. Tower of Doom is as visually appealing as its successor, in my opinion. Capcom’s past penchant for crafting their beat ’em up games with beautiful 2D animation is wonderfully represented here. Each of the playable characters, the mythical creatures you come across and the massive bosses that take up half the screen all look great under their 2D anime sheen. This digital package also comes with the selection menu that’s similiar to Capcom’s past online/HD remasters.

As for both of the game’s audio, you’ll hear your usual array of death screams and yells as you cut down all manners of beasts common in the Dungeons & Dragons universe. Chances are the theme of Shadow of Mystara might get stuck in your head after a few hours of play.

Tower of Doom/Chronicles of Mystara looks like your average beat ’em up, but it plays like a deep action RPG. Both games entail your usual elements of a beat ’em up – co-op play, plenty of selectable characters with differing stats and a host of enemies to hack and slash as you move from left to right.

What separates these games from the rest of the genre pack is its action RPG elements – leveling your character up, upgrading weapons/items, collecting artifacts, equip-able items etc. Battle music even cues up as soon as you come across your usual array of dark elves and skeleton warriors. After completing a level, you can even purchase more items from shops and prepare yourself for your next adventure. These deeper elements help the game’s shelf life last a lot longer than most arcade beat ’em up’s.

Each of the selectable heroes (the fighter, elf, cleric, dwarf, magic-user and thief) all come with their own personable attacks, combos and skills. Some of them are fast but a bit weak in the melee department, while others are strong yet a bit slower than their faster counterparts. This helps flesh out the replay value a bit more, since you’ll want to take control of all the heroes as they have actual differences between them all that matter. You’ll notice those differences immediately as you pull off somersault kicks and pick looks with the thief and break open heavier treasure chests with the dwarf.

So which game is the better of the two? It’s definitely Shadow Over Mystara. This doesn’t mean Tower of Doom isn’t a quality game, though. You’ll certainly enjoy running through the game’s seven levels and lay waste to the super tough red dragon you’ll run into. Shadow Over Mystara plays 10-times better than its predecessor, though. The visuals are somewhat brighter, there’s more characters to play with and you’ll get to play some levels that break the norm of your usual beat ’em up stage. You’ll be surprised when you hop on a raft and race down a river while touching enemies and engaging in sudden RPG-like encounters.

Both games come with mutliplayer options, which makes your trek through each of the game’s levels even more exciting. A massive amount of fun can be felt when you and three of your buddies are all onscreen and wreaking a town full of mini-orcs. There’s plenty of loot to discover, various rooms to enter and several new moves/spells to dish out. Your average playthrough of either game will run for a good 45 to 50-minutes, which is perfect for those gamers looking for a quick romp.

Capcom made sure to fill out this downloadable package by putting in a few cool additions. Of course you can purchase pieces of collectible art that’s cool to look at every now and then. Drop-in/drop-in online play makes an appearance, too. You can change up every playthrough with different House Rules (Enemy Rush – Fight against time in this special Time Attack Mode. Start the game clock with 30 seconds and increase the clock with each enemy you kill!). The new Challenge System gives players an extra incentive to play the game than once, thanks to the addictive level-up nature. The Wii U touch screen enables players to select their spells/items much faster, too. The Arcade Cabinets are also a cool little nod to the arcades of yesteryear.

There’s a few issues with both games that will bring down your enjoyment level of both games. Like all beat’ em up games, cheap deaths come a dime a dozen. You may have unlimited continues, but you’ll still catch an attitude when you lose lives thanks to cheap bosses (THAT DAMN FLAME SALAMANDER AND SYNN!) and sudden traps. Some of the text for the game’s were seemingly lost in translation too, so you’ll notice a few grammar issues here and there. Plus the item selection menu in Shadow Over Mystara is over complicated when you compare it to Tower of Doom’s item selection mode. 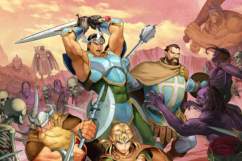