Mobile strategy games seem to be the most addictive gaming craze nowadays. Clash of Clans, a free-to-play take on the genre, lets players raid each other’s villages with barbarians, wizards and pissed off dragons. We’re back to aid you in your run to the top of game’s leaderboards. Here’s the top 10 tips and cheats you need to know for Clash of Clans.

1. Know Which Resources to Raid During Multiplayer Battles

– During the multiplayer skirmishes you’ll no doubt be a part of, there’s a certain percentage of resources that are obtainable from certain item drills/storage locations:

2. Defend Your Base With a Bunch of Walls

– Once you start the game, you’ll have access to wooden walls. These walls come in at a pretty low level (level one), which means they’re not worth much when high-level barbarians come barging into your base.
– Try to upgrade these wooden walls to level three as fast as possible (attain for level four or five if you can, too). These walls will end up being your strongest defense, so make sure you purchase all the available walls within your level. Place these walls all around your base so that no opening pathways are available for entry.
– Let those attackers break down your walls and struggle; don’t let them ease on in without much trouble because you mistakenly left a lane open.

One of the easiest and laziest ways of farming in clash of clans is by lowering your trophies to under 200 and farming with goblins. The match-making system in clash of clans uses your amount of trophies to find an enemy. When a player is still low level they won’t have a lot of trophies. This way we can use this match-making system to our benefit by lowering our trophies and getting easy opponents. Of course, the loot will be less, so that’s why we’re going to use less troops as well.

Goblins are one of the cheapest troops, and we only need about 20-40 goblins to raid at least 30k gold and elixir from a very badly protected village. As you can see on the picture here, there’s 87k gold and 58k elixir available, while there’s only a level 1 cannon there to protect it! I only had to use 25 goblins to steal all of his gold and elixir. To lower your trophies it’s always very basic. Train goblins only and just start looking for battles, but we’re going to be using a little bug. I wouldn’t call it abusing because we’re just giving away our trophies, and all this little glitch is going to do is speed up the process.

So when you battle, you usually skip a lot of fights until you find the right one. But when you’re dropping trophies you’re going to be using 1 goblin on every village you see, but this would still take a very long time if you had to load your own village after every battle, so here’s a step-by-step explanation of how the ‘glitch’ works:

4. Keep Your Trophies Even After Ending A Battle Prematurely

– If you’re ready to wave the white flag before the start of a tough raid, just go on ahead and end the battle. You’ll keep your trophies as long as you don’t deploy any troops or cast any spells. Make sure the “Surrender” option isn’t visible, either!

5. Get Some Free Elixirs (And Save Them While You’re Offline)

SuperCheats.com offered these cheats for those looking to get (and keep) more elixirs:

Free elixir
This cheat only works when you have less than 30 seconds from finishing a troop upgrade an a full army. About before thirty seconds, cue up the troop you are upgrading. Don’t forget before you do this you have to make sure you have a full army. After the upgrade finishes, untrain the troops. Now, you will get free Elixir! 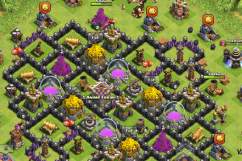 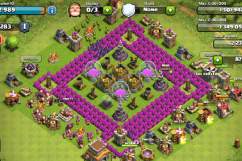