Admit it – Super Mario Bros. had to be the most addictive video game any of you old heads have ever played. The exciting mix of platforming action, classic music/audio and unforgettable levels all managed to make this NES game a classic. We’re now in the year 2013 and games have improved by leaps and bounds. Mario has evolved alongside those older gamers who met the plumber in red during their younger years.

YouTube user Deloix must be nostalgic about the good ol’ days of Mario because he went out of his way to put together this beautiful video – a modern, 3D re-imagining of Level 1-2 from Super Mario Bros.

Prepare to be amazed at this awesome piece of old-school meets new school action.

That first video wasn’t enough to whet your appetite for more Mario, huh? Then take a look at the gameplay trailer above that debuted at E3 2012. 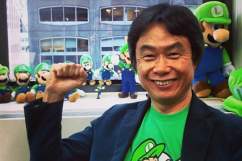