Smash Bandits comes along for gamers who prefer dodging the po-po with a super-powered muscle car. The cops are on your tail a whole lot for this mobile action racer, so it pays to know the best way to avoid and smash all those cops behind you.

It takes a lot of skills when it comes to staying on road and staying the leaderboards. After smashing, boosting and getting some high TV ratings, we came away with 10 tips/tricks/cheats that will push you to that high rating you’ve always wanted.

Pay attention to these game winning tips/tricks/cheats and your ride will be crashing for the greater good in no time.

Official Smash Bandits TrailerSmash Bandits by Hutch Games Ltd From the makers of Smash Cops — crash through America in the craziest road race to hit the App Store. Power up to faster cars, get the edge with getaway gadgets and outrun the cops as you speed to the state line. SMASH EVERYTHING Well, almost. Whichever route you take through an ever-changing world of dirt tracks and dusty logging towns you can crash and bash your way through smashable scenery in the most intense display of destruction you have ever seen. UPGRADE & OUTRUN Make sure you're always ahead of the game (and the cops) with cool car upgrades. Start with a puny compact and make it awesome with extra speed, handling and strength. And when you start earning big, you might just get your hands on the fastest road car on the planet, the stunning Hennessey Venom GT. SMASH THE LEADERBOARD What crazy road race would be complete without a TV chopper hovering overhead? The further you get and the more you smash, the bigger the TV ratings and the more cash you earn. Play against your Facebook and Game Center friends to see who can become the most famous Bandit on network TV. BOOST YOUR CHANCES Before you head off you get to choose something to help you along the way. Stinger-proof tires, the 'Stunner' car taser and even a tank are available to give you the edge over the relentless Sheriff McBride and his deputies. CRUISE CONTROLS Innovative one-finger control makes it super easy to drive, drift & spin your car, and unleash those helpful gadgets – no matter where you're playing. TAKE A BANDIT CHALLENGE The Smash Bandits race organisers don't think that simply out-running the cops is a big enough problem, so they've put together over 100 challenges where you can test your driving skills to the limit. IMPORTANT: Smash Bandits is not supported on iPad (1st Generation), iPhone 3GS or iPod Touch (4th Generation or earlier). iTunes Store Page: https://itunes.apple.com/sg/app/smash-bandits/id602403667 Homepage: http://www.hutchgames.com/contact2013-08-15T03:18:53.000Z

1. Don’t Get Too Smash Happy

TouchTapPlay.com offered a tip that actually advises players NOT to smash (too much…):

This might sound like a strange tip to start with for a game called “Smash Bandits” but it is really important: you only have a limited amount of powerful smashes that your car can handle (5, to be precise) so you should really try and not waste them in crashing into other cars on the road, rocks or trees. You will generally lose 1 smash whenever you go through a cop car barrier unless you go straight through the middle, and you’ll probably hit the stinger every now and then, so it’s better to reduce random smashing as much as possible.

2. Your Pace Sets The Pace for The Cops

One thing to take notice of is the AI’s response to how fast or slow you’re driving. If your driving pretty slow, the cops will match your speed. The same idea applies to you if you’re driving pretty damn fast! The best way to approach a steady pace is by driving at a medium speed level. Set the right pace, but make sure you’re not driving like your grandmother or driving too fast to the point where you lost control of your ride.

3. Try to Slide Through Those Police Barriers

If your driving skills are top notch, you can go ahead and drive through the small openings that police barriers sometimes present. If you’re not comfortable slipping through those police barricade cracks, avoid them and keep your ride intact.

4. Focus on Improving Your Second Ride

Modojo.com knows its best to upgrade your second ride over your starting vehicle:

Don’t invest heavily in the starter car, as you really want to get out of it as quickly as possible. Instead, save up your cash for the next car in line, and then gradually improve this vehicle evenly across all upgrade areas as soon as your money will allow.

5. Hit The Off-Road Sections to Throw the Police Off

Modojo.com also knows its much safer to drive off-road to throw off those cops:

If you’re struggling to lose the cops on your tail, try getting off-road. There are many more opportunities to cause the police trouble here, from sliding through gaps that catch them off guard, to spinning them off the world edge and into oblivion. Be creative at all times if you want to keep the police at bay.

Share these Kingdoms of Smash Bandits tips and cheats!

You’re probably pretty tight with your money, so you probably don’t wanna spend too much real world currency on the game’s items. Just head to the game’s store section, watch a few ad’s and make some extra coins appear in no time. This is one of the best ways to save money and nab some free currency in the game.

7. Complete a Few Challenges, Too

Another way you can earn some more coins is by taking on the game’s many listed challenges. It pays to play and complete the easier challenges and get as much money out of the mas you can.

The police cars that you see sitting pretty on the side of the road have access to the Stinger – the spikes that land on the road and slow down your ride. Do your best to swerve out of the way and avoid the parked cars and their weapon of choice.

TouchTapPlay.com knows what happens when a cop car turns red:

Whenever a cop car turns red, it means that they’re about to ram you. So try to lose them or ram them back (I always play with the ram upgrade, it’s totally worth it!)

10. Make Sure You Invest In These Gadgets

TouchTapPlay.com also advised the gadgets you should spend the most time investing in:

In my case, I start all my races with the RAM gadget and I’d recommend you do the same too. At 500 it’s totally worth it as it helps me get further in the game and brings in some extra coins. Never since I started playing this game I made less coins than the cost of the RAM gadget, so you’ll always be on a profit. The others should be used just to complete the missions, with the note that the Tank Stash can be pretty useful if you get to use it (it turns your car into a TANK).

If you have any extra tips and cheats you’d like to contribute to fellow Smash Bandits players, throw them in the comments section! 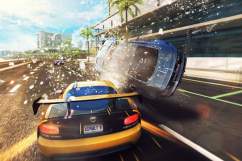 Asphalt 8: Airborne: Top 10 Tips and Cheats You Need to Know