Activision knows what the kids want – toys and lots of ’em! Plus easy to understand video games that aren’t too tough. With the invention of the Skylanders franchise, Activision conquered two birds with one stone by crafting an interactive experience that let players transport characters into an open world via collectible figures.

After last year’s Swap Force comes 2014’s newest installment – Skylanders: Trap Team. Tons of information was released, even though the game’s official release is months away. Thankfully, we have all that important info all right here in one place.

Here’s everything you need to know about Skylanders: Trap Team!

1. New Trap Masters and Playable Villains are Being Introduced

Skylanders: Trap Team will focus on the newest additions to the series – the all-powerful Trap Masters and over 40 new villains to conquer and collect. These Trap Masters have the ability to fight with Traptanium weapons, do extra damage to any bosses they encounter and discover any hidden areas that may contain extra bosses and Traptanium crystal shards. As for the newest line of villains, over 40 new characters will make their way into the game. Each villain will abide by a certain elemental type that coincides with the crystals you can purchase in stores.

Some of the new Trap Masters announced thus far include Snap Shot and Wildfire, while the new villains include newly announced characters such as Chill Bill, Shrednaught and even a playable Kaos

2. A New Portal is Coming

The newest portal that will be packed in with the retail release is the Traptanium Portal, which features a transparent base that resembles a cracked crystal. The game’s crystals are powered through the use of the connected prison attachment that holds captured villains.

3. Collectible Crystals Will Have to Be Bought in Order to Capture All of the Villains

Defeating any of the game’s many villains will allow you to trap them within the physical Traptanium crystals. Once transported, those evil characters will being speaking from within the crystal (in actuality, the crystals come pre-installed with recorded audio of the trapped villains and lights up in sync with each line said). Players can then turn these captured villains into good guys who become playable once you send them back into the game.

While you have one main action figure on the base and a character encased crystal in play, players can instantly swap between both characters with the simple press of a button.

4. Jumping Will Be Returning

One of the welcome changes implemented in Swap Force is the jump. Characters will still be able to jump, plus all the Skylanders can utilize a powerful new smash attack maneuver once they’re in the air.

5. The Story Involves Kaos and His New Evil Plan Involving A Prison Breakout

Longtime series baddie Kaos makes his return and hatches a new plan in order to take control of the Skylands. This new evil plan results in him helping the worst villains in Cloud Cracker prison all escape and aid him in his efforts. In the process of helping them all escape, Kaos ends up sending plenty of Traptanium Crystals and the Trap Master to Earth (meaning they’ve all become physical toy products that you’ll have to purchase in order to take full advantage of the game’s newest features).

6. There Won’t Be Any New Zones for Past Skylanders Characters

For past characters in the series, there won’t be any specific elemental zones for them all. This means that the series’ Giants and Swap Force characters can only be used to fight and venture around Skylands, but they won’t be able to venture into the secret Trap Master zones.

7. The 3DS Edition is Being Developed by Two Development Teams

8. All of the Skylanders Figures Released Thus Far Will Be Compatible

Each and every Skylanders toy that has been released before Trap Force will be compatible with the game’s new Traptanium Portal. However, the Trap Masters won’t work with past portals from the last three games in the series.

9. The Level Cap Will Remain the Same

The overall level cap for all playable characters will remain at Level 20.

10. The Release Date Has Already Been Announced 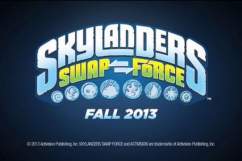