Batman fans and hardcore gamers were very much looking forward to playing a next-gen Arkham game in October 2014. But on the same day that a new teaser trailer was released, news of the game’s disappointing delay into the following year was also announced. Here’s the five fast facts you need to know about Batman: Arkham Knight’s push into a 2015 release date.

It has officially been announced that the Rocksteady Studio’s developed Batman: Arkham Knight will now be pushed back from its expected October 2014 release schedule to an unannounced date in 2015. The news came via a brand new trailer that was a teaser for the game’s planned Battle Mode showcase at E3 2014. The development studio hasn’t released any official word on why the game has been pushed back to 2015 as of yet.

2. It Was Originally Slated to Release in October 2014

The game’s original planned release was officially slated for October 2014 (some leaked store advertisements noted that the game was supposedly planned for release on October 14, 2014). This newest installment in the Batman Arkham series is still being developed for next-gen consoles (Xbox One and PS4) and the Microsoft Windows PC gaming platform.

The teaser trailer that was released today (June 3, 2014) showed off the game’s newest vehicle implementation – the all-powerful Batmobile. The Batmobile is capable of entering two separate modes of play – Pursuit mode and Battle mode. Just by the touch of one button, players will be able to enter into either mode in order to tackle different gameplay situations.

Pursuit mode has been catered to work when Batman is navigating through the streets, while Battle mode is better for driving through tight corners and engage in battles with rival vehicles. The Batmobile can not only be actively controlled by driving it, it can be also be controlled through a remote and be called from over a short/long distance. 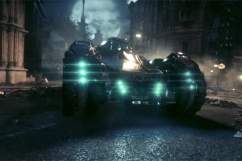 4. A Representative for Rocksteady Studios Previously Spoke About The Game’s Lengthy Development Time

Kotaku spoke to Rocksteady Studios Brand Marketing Producer Dax Ginn and got some quotes from him on how the game’s development takes as much time as possible:

Now Batman: Arkham Knight is totally awesome. The thing about awesome, though, is awesome takes time. And totally awesome takes a lot of time. So in collaboration with our colleagues at Warner Bros Interactive Entertainment and DC Comics, we have decided to extend the development time of Batman: Arkham Knight. Now, the very simple reason for doing this is to ensure we are delivering the awesome level of quality that Batman fans and gamers expect from this, the final episode and the epic conclusion to the Rocksteady Arkham trilogy. The Dark Knight will face his ultimate challenge in Batman: Arkham Knight now to be released in 2015.

5. Six Other Big Video Games Originally Announced for Release in 2014 Have Also Been Pushed to 2015

Along with Batman: Arkham Knight being delayed till 2015, six other AAA-games have also been pushed from their 2014 release dates into the next calendar year: