It’s great to see the past-gen of consoles get some much-needed love with all these bran new game releases. GRID Autosport, a racing game that looks as if it’s being played on next-gen consoles, is Codemasters sim-racing sequel to the past two GRID games. So is this latest romp around the track worth getting all hyped over? Here’s the top 5 reviews you need to read about this brand new racer!

IGN.com noted that the game’s racing mechanics, tight handling and great offering of tracks stand out as the game’s best aspects. The lack of pit-stops and the up & down quality of the graphics were described as the game’s worst features, though:

For the first time in years, Grid Autosport feels like a Codemasters racing game built to appeal to long-time Codemasters racing fans. Grid Autosport promised proper motor racing, and that’s exactly what it delivers (and plenty of it, to boot). It falls a bit short in the visual stakes compared to the hotter, new generation completion, but few developers get pack racing right like Grid Autosport does. The spirit of the classic TOCA games is finally back. At the very least, maybe it’ll finally teach the rest of the world what a ute is.

GameSpot gave the game a much lower score due to the spotty nature of the game’s A.I., uninteresting race types much too forgivable car handling. They did enjoy the game’s variety of tracks, split-screen multiplayer and customizable difficulty levels:

This failing is possibly a byproduct of Autosport’s exhaustive approach. There are a number of nice extra features that similar games have shied away from: split-screen multiplayer, for example, and an online component that is entirely separate from the single-player, which means there are essentially two games to progress through. Play it for a few hours, and the cracks begin to show, though. They’re not game-breaking, but they are abrasive, and they dull the shine of the early portions of the game. If you’re up for some casual racing, Autosport is a decent option, but when you go deep, the experience is soured by the finer details.

IncGamers.com also gave the game a six, noting that the single-player is hampered by the much-too predictable A.I. racers. They did enjoy the game’s fun multiplayer and wide variety of automobile tuning options:

Like the back end of a car during a sloppy Drift event, Grid Autosport is a little bit all over the place. While it’s the usual slick production you’d expect from Codemasters, the game only partially achieves the company’s aim to make amends for the arcade-leaning and option-shy Grid 2. The simulation crowd will appreciate Autosport’s changes to how the cars handle, but not the half-hearted cockpit implementation. Driving is now far more about sticking to the racing line than drifting, and the included tuning options do alter the feel of a race (at least at their extremes.)

Eurogamer.net noted the game is decent enough. They described it as a return to form for Codemasters’ long-running racing game series:

Grid Autosport is a fine racing game, though it’s never a thoroughbred one. It’s the muscle car that was Grid 2 stripped out and retooled for the track, but too often you can see the solder-work at the seams. In 2008, Race Driver: Grid was a partial reinvention of the racing genre, equipped with a handful of fresh ideas. Six years on, Grid Autosport – while a definite return to form for Codemasters – is simply a rediscovery of it.

ComputerandVideoGames.com seemingly loved the game. They were content with its aggressive A.I. racers, nice track selection and amazing sense of speed. Their only problem with the game lied in it’s 30fps (frames per second) limit on consoles:

As apologies go, Grid Autosport is entirely convincing. Not that we imagine Codemasters is in any way ashamed of the undeniably boisterous Grid 2, but in addressing the criticisms leveled at it so thoroughly and with such vigor, it’s clear the studio hasn’t forgotten Grid’s core fans – nor, for that matter, TOCA’s. And in removing all the well-meaning fictional fluff that was engineered to make you feel like part of a racing event in previous games, Codemasters has created a Grid that makes you feel more like a competitive driver than ever before. 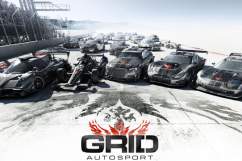 Read More
Game Review, Games, PS3, Xbox 360
"GRID Autosport" looks amazing, but does it play just as good as its racing game rivals? Check out what the reviews have to say.