IT HAS BEGUN! Ed Boon’s cryptic tweets and the leak of an official looking Mortal kombat promotional poster have all lead up to this.

Mortal Kombat X is definitely a go for 2015! The announce trailer has finally hit the web and it features everyone’s favorite two ninjas. And as expected, they can be seen beating each other to a bloody pulp as Wiz Khalifa drops a few bars in the background.

Someone gets finished here and it’s quite cringe inducing as past Fatalities go. And by the way, Wiz’s song being played here is called “Can’t Be Stopped.”

Check out the epic stare down between Scorpion and Sub-Zero below:

Now feast your eyes on Sub-Zero and Scorpion’s epic battle as they do war in the announcement trailer for Mortal Kombat X! You can expect to see this fighter on the Xbox 360, Xbox One PS3, PS4 and PC. Multiple variations of each fighter will be available, plus a “persistent online contest” has been noted as a major feature of the game. 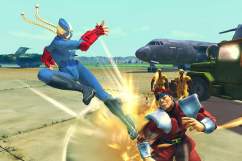 The Fighting Games You Need to Know About for 2014