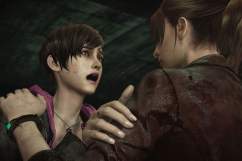 Capcom is getting back into the groove of things by delivering a better presentation of its long-running survival horror series. The digital release of Resident Evil Remaster HD has become a wild success, which comes as no surprise. Now the RE series will deliver another digital installment in the form of Resident Evil: Revelations 2.

Along with newly introduced characters, fans’ most beloved characters will be making their return playable form. New horrors will torment you as you navigate through a mysterious new island. Here’s everything you need to know about this newest co-op installment in the Revelations side series.

Resident Evil: Revelations 2’s plot takes place between the events of Resident Evil 5 and Resident Evil 6. Two of the main playable protagonists revealed at first included the return of Claire Redfield and Barry Burton’s daughter, Moira Burton. Both Claire and Moira get kidnapped by a mysterious faction during a celebratory function. When Claire comes back to her senses, she discovers that she’s been trapped inside of a prison cell on some type of mysterious island.

Once Claire breaks out of her cell, she runs into Moira and they seek out some type of escape route from their dangerous circumstances. Both women discover a type of mood bracelet on their wrists, which changes color based on their fear levels. A mystery person has trapped them here, which is another part of the plot that players will come to know during their ordeal.

Check out the trailer above to get a better look into Claire and Moira’s harrowing predicament.

Co-op partners will not only get to play the main campaign with Claire and Moira, but they’ll also take control of RE fan favorite Barry Burton and a special little girl named Natalia Korda. Barry received some intel on where his daughter is, which leads him on a search for her.

He makes his way to the same island that her and Claire and trapped on with a goal in mind – save his daughter Moira and leave this island in one piece. Among the violent creatures that Barry encounters, he comes into contact with a mysterious little girl who’s capable of special abilities.

Take a look at the trailer posted above to get some more insight into Barry and Natalia’s story.

3. The Main Enemies in the Game are Referred to as the “Afflicted”

There won’t be any zombies shambling towards players this time around. The main baddies that will hunt you down in Resident Evil: Revelations 2 are simply known as the “Afflicted.” These tortured humans have been driven mad. Their physical forms displays the torturous methods done to them and they attack anyone they see on sight.

Players will have to take advantage of this enemy’s main weakness – light. Moira will have the ability to blind the Afflicted with her flashlight, which stuns them for a few seconds and allows Claire to shoot them down much easier. Barry will also have to contend with these crazed creatures, which come in different forms. Two of those other forms are known as the “Othrus” and “Sploder.”

4. Raid Mode Will Be Making Its Return

One of the more requested modes for new installments is the frantic Raid Mode. Thankfully, Raid Mode will be making its grand return with the launch of Resident Evil: Revelations 2. The 1st episode of the game will feature Raid Mode with 54 missions and three difficulty settings.

Episodes two and three will introduce 36 new missions each, while Episode four will bring along 68 new missions. The maps for this new Raid Mode will be inspired by locations from the game itself, the 1st Revelations and Resident Evil 6.

15 characters will be selectable in Raid Mode, which will be unlocked with each new episode. For gamers that purchase the retail physical release, they’ll get to take control of Hunk and Wesker. The staring cast of characters offered in Raid Mode includes Claire, Moira, Barry and Gina.

Check out the gameplay breakdown video above to see Raid Mode in action.

5. Each Episode Will Be Released Digitally, While the Physical Release Will Feature Every Episode Plus Extra Content

Resident Evil: Revelations 2 will release digitally across a wealth of platforms – PS4, PS3, Xbox One, Xbox 360, PS Vita and PC. Once every episode has been released, a full physical version of the game will hit stores and feature extra content.

Here’s the full release date slate for the entirety of Revelations 2: