The idea of a first-person shooter roguelike is a novel one. The FPS genre has been successfully combined with everything from role-playing games to 3D platformers, so why wouldn’t a shooter work as a roguelike? I have faith the concept is a solid one, but that’s not necessarily thanks to Terrible Posture Games’ attempt. With dreary visuals, simplistic combat and repetitive enemies, Tower of Guns is a stale experience light on features and weak on execution that somehow still beckoned me back for another go each time I died.

Tower of Guns‘ attempt at a “story” proves in a humorous way how little plot can matter to certain games. Every time I died, I’d respawn as a new character, complete with dialogue bubbles at the top of the screen explaining why I was running through a tower full of lethal robots. Some of the tongue-in-cheek narratives made no sense (in one run, I was a vacation-bound mouse trying to make it through the DMV or something), but that was half the fun. I only wish the stories were told through actual voice acting; reading the word bubbles sometimes distracted me, leading to premature deaths.

Despite being a roguelike, which erases player progress with each death, Tower of Guns still gave me a sense of advancement through various perks and weapons I earned by completing different challenges and tasks. The difference between success and failure often lay in the loadout combination I decided to start with. Weapons level up or down based on the number of enemies you kill or damage you take in any given run, which gave me extra incentive to kill everything in sight and dodge enemy fire at all times. However, it was much too easy to forgo all of that and blindly sprint through each stage, not shooting anything until reaching the boss at the end of every level. 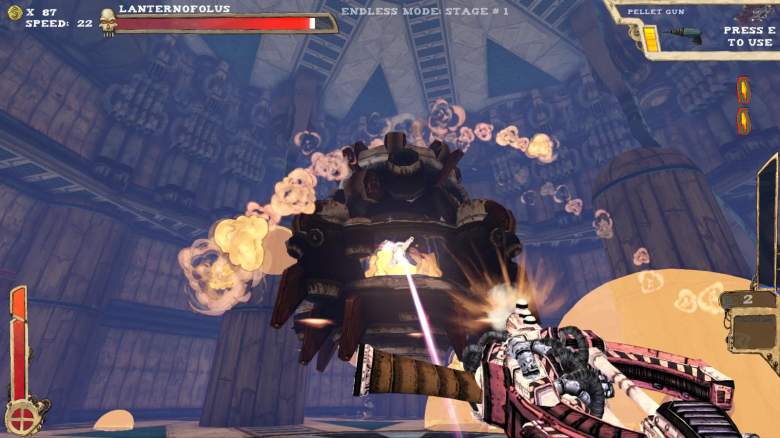 Most enemies are forgettable rusty chunks of metal.

Speaking of bosses, I found them dull affairs. There are different ones, but they’re all the same at heart: giant, brown robots that move around and shoot various projectiles. That goes for each enemy, actually. I hoped by my third run to encounter a different opponent, but I saw nothing but bland robots that more or less did the same thing. It got old quick for a game all about running and gunning, especially when every villain I crossed could be killed by circle-strafing and jumping nonstop.

The presentation felt as mediocre as the gameplay. The only sounds I heard were explosions and a forgettable music track. The tower could have felt more alive had doors or the lava I often came across generated some noise. Because it’s a roguelike, Tower of Guns features randomly generated levels, but the design of each was nonsensical, giving me the feeling that I wasn’t in a real tower. The PlayStation 2-era graphics didn’t help immerse me, either.

It only took me five runs to beat Tower of Guns, at my final try clocked in at less than 20 minutes. Each time I died, I felt an immediate desire to run again if only to prove to myself I could do better. After I beat the game, however, I knew I’d conquered the tower and felt no need to go back, despite an endless mode and one that randomizes the effects of each in encounter. Tower of Guns failed to engage me for more than a few hours, which is disappointing when Terrible Posture Games had such a fun concept to work with.

Tower of Guns‘ concept is tantalizing, but its short length, easy combat and subpar graphics and sound design left me wanting more. Bosses could have been great, but they ended up feeling the same. I enjoyed the randomly generated story lines and the slew of perks and features, but the meat of the game tasted bland in comparison.

Tower of Guns was reviewed on the Xbox with a digital copy provided by the publisher.