Over the years, we’ve noticed that several franchises have dug themselves out of the doldrums of gaming mediocrity. Batman has finally garnered praise due to his Arkham series, Marvel’s superheroes have starred in awesome action RPG/LEGO games and plenty of movie games have improved lately. However, the most famous Kaiju in the world seems to still be stuck with middling game quality on its record. The American PS4/PS3 release of Godzilla is an average experience at most.

The majority of this monster and city basher involves taking control of famous Kaiju and wreaking havoc. Destruction Mode puts you on a path of…well, destruction as Godzilla. Over a campaign with branching paths, players occupy different city environments as you destroy armies, buildings, other Kaiju and G-Energy Generators. The 1st few moments of tearing through everything and anything that steps to Godzilla wrong is pretty entertaining. Encountering other members of the films series’ monster roster always calls for cool one on one battles. But, the action here becomes tedious in a hurry. The tank-like controls makes handling those massive creatures a frustrating experience, which gets in the way of the fun. Each stage’s formula breaks down to the usual setup, which is something that loses its luster after just a few stages. Getting the chance to control other monsters and defend the Earth from Godzilla is a nice change of pace, but it falls into campaign mode’s same repetitive trappings.

Besides Destruction Mode, Godzilla offers up King of the Monsters Mode. It mimics the proceeding opponent ladder format of fighting games as you pick a creature and go to war with numerous rivals. Each playable Kaiju looks excellent and sounds just like their movie counterparts. The visuals for the environments and everything else within the game may be unimpressive, but it’s evident that special attention was paid to the monster models. Watching them all pull off devastating attacks and belt out proud roars is a treat for longtime fans. That feeling of repetition isn’t felt as much here since proceeding through six stages of battles goes by a bit quicker than the long campaign mode.

Godzilla has a ton of potential, but everything about it screams “unfulfilled potential.” Playing it for its first few hours may lead you to believe that it’s a fun, mindless action game. But spending too long with it makes feelings of “meh” creep in and push you away from staying on it for much longer. You may get an extra hour or two of fun from the game’s online multiplayer battles and Diorama Mode setups. But the completely average makeup of this title will sadden huge fans of the big lizard and even non-fans who just want a great, current-gen monster brawler.

We had high hopes for Godzilla. But after putting this game through its proper paces, it’s hard to deny just how much of a disappointment it is. Sure, the Kaiju roster looks amazing and the audio dished out by them and human characters are loyal to the source material. But the repetitive gameplay, confounding control scheme and subpar graphics bring the game’s overall experience down far too much. Godzilla deserves so much better. 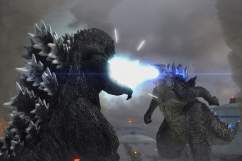 ‘Godzilla’ (The Game): 5 Fast Facts You Need to Know