During the warmer months of the year, gamers usually find themselves with slim pickings. For those who’ve quickly played through their backlog, fresh new experiences are on the horizon but they seem locked within the fall portion of the year. For strategy RPG fans with a love for anime and sci-fi elements, Lost Dimension’s summer launch is a blessing. While there may not be a ton of hype or fan fervor surrounding this Japanese title from Atlus, spending a few hours with it will make you a fan of its interesting spin on its genre conventions.

The plot you come to discover at the start of your campaign is generic at best – a team of super powered individuals are sent to rid the world of the all-powerful “The End.” What makes everything a bit more intense is the added element of a traitor amongst your squad. Your main protagonist, Sho, has the ability to listen to his teammates’ thoughts and decipher who has an evil ulterior motive. Part of the fun that comes from Lost Dimension is working through its visual novel presentation. After each enemy encounter, you’ll get to speak with each party member, develop stronger bonds with them, delve into the minds of suspected traitors and label them as you go along. With this implementation of trust and figuring out who doesn’t have your best interests in mind, this game gets that much better with such a standout mechanic.

When you step out into the field for battle, you’ll become quite comfortable with everything thrown at you if you’ve played the Valkyria Chronicles games. You can freely move your roster around in a limited space, get close to enemies and pull off any moves within your arsenal. What makes Lost Dimension stand out from Sega’s military flavored series are two awesome mechanics – Defer and Berserk. Characters can sacrifice their turn and pass on energy to one who’s already used up their turn, which allows that character to take an extra turn. And if anyone takes far too much damage during battle, they’ll go mad. They’ll acquire more power, but become uncontrollable and prone to attacking your own party members. These two factors do a lot to change up the gameplay and make you properly adjust your battle strategies. Also having the ability to get close to teammates to pull off assist attacks plays another part in making each battle different.

Moving from floor to floor is a nerve wracking experience. You’ll enter a room and be forced to vote on who the traitor is. After speaking to so many of them and developing a strong sense of camaraderie with them, essentially killing one of them just to move up a floor is always heartbreaking. Lost Dimension is an emotionally draining game at times. But you’ll feel so tied to the main mission at hand and keep discovering what’s really occurring behind the scenes. Each playthrough changes up who’s the traitor or not, which makes subsequent campaign run through’s freshen up every time.

Lost Dimension does have its faults, though. You’ll grow quite tiresome of the enemy cannon fodder thrown your way across each mission. Your team will run into multicolored cyborgs, insect shaped robots, heavy tanks and more robotic baddies. Their design leaves a lot to be desired when compared to your team and the main antagonist, however. You may face new enemy types as you proceed, but you’ll quickly recognize them as new cyborgs with simple color changes. While the party you roll with looks great, their attacks and special abilities don’t. There’s nothing flashy coming from you or your enemies when its time to dish out some big damage. Cooler looking attack animations would be welcome here, but they’re sadly not a factor.

Lost Dimension gives strategy RPG gamers a unique take on what was accomplished with the excellent Valkyria Chronicles series. The rewarding gameplay comes from your implementation of the game’s interesting mechanics, which keeps you enthralled and ready to confront its challenges. The usage of a trust system and discovering who the traitor is does an awesome job of making your care that much more about the plot. The enemy variety may be lacking and the visual representation of your attacks aren’t exciting, though. These minor annoyances shouldn’t deter you from delving into this fresh take on strategy RPG’s/visual novels. 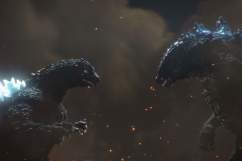 ‘Godzilla’ (The Game) Review: The Big Lizard Stumbles Into Mediocrity