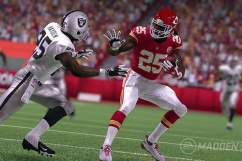 The sports genre enters into a blossoming period once August rolls around. The NFL season is right around the corner, which is why gamers look forward to simulating their preferred outcomes with the newest football simulator. EA Sports and EA Tiburon make it a habit to annualize its line of Madden titles and add incremental upgrades to its newest iterations to keep them well polished. Madden NFL 16 incorporates a mix of changes that impacts the ways you approach passing and more.

For those worried about this 2016 edition being nothing more than a roster/graphical update, you have nothing to fear. Madden NFL 16 does its best to greatly impact the on-field action with new mechanics. One of the biggest changes you’ll have to master are the new passer/receiver mechanics. Throwing out short/long passes has a more risk/reward feel to it now thanks to the many variations of catches that are implemented. When the ball is finally thrown, you can choose how you want your catcher to act once they receive the ball. The option to pull off an aggressive, run after catch or possession ball retrieval produces bigger moments and adds a welcome layer of new strategic options on the field.

More new features arrive in the form of new pass types for quarterbacks and defensive play styles. Not only can you choose how to catch the ball, you can also decide how to let the ball loose in the first place. A myriad of button presses and combinations results in several types of passes, such as shot plays, low throws, bullet passes etc. On the defensive side of the game, you’ll also have a great mix of options that give you a better chance at stifling the offensive line. Choosing to gang up on the ball carrier, taking the chance to pull off an interception or going directly at the ball receiver are nice options to have. Madden NFL 16’s gameplay keeps itself from growing stagnant with these new strategic implementations.

Fantasy football fanatics will gravitate more towards Draft Champions mode this year. Players get to move through 15 rounds of drafting the most complete squad for offline/online play. Half of the excitement of this mode comes from picking the right players and coach to make them all gel well. The randomized picks you’re provided with during each round helps keeps things fresh and allows for all types of team formations. For those Madden fans who are simply interested in quick bursts of fun that are filled with plenty of dream squads, Draft Champions is the way to go.

Everything on the field feels fresh and new besides the commentary. From time to time, the individuals voicing their opinions on the game at hand sometimes don’t match the current excitement on the field. There are times where the 2-man booth provides nice bits of player statistics, but they usually are out of sync with the game and can be dull at certain points. Besides the fresh implementation of Draft Champions, every other mode in this annual installment remains largely unchanged. Madden Ultimate Team is the same as its always been, which is fine. But with so many new changes, it would have been nice to see familiar modes get a facelift as well.

Madden NFL 16 keeps up the tradition of providing great football gameplay for its loyal fans. There’s a lot more to learn this year due to the implementation of great passing/receiver mechanics and defensive play options. Draft Champions is a fun mode that lets you play out your wildest fantasy football scenarios. The commentary is more miss than hit and this sequel’s longtime modes don’t implement too many gameplay changing features, though. Madden NFL 16 still performs as a great dosage of too-fun-to-ignore digital gridiron action.

Read More
Electronic Arts, Game Review, Games, Madden NFL, NFL, PS3, PS4, Xbox 360, Xbox One
Should you return to the Madden franchise for its 2016 iteration? Find out with our latest game review.