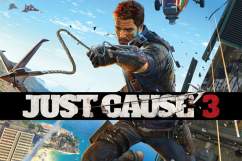 Simply put, ruthless dictators are the worst of the worst. There’s always a wide swath of discontent from the people who seek freedom and despise their crooked ruler. The people who reside on the beautiful island of Medici have lived under the overpowering thumb of Sebastiano Di Ravello long enough. Their savior will come in the form of a returning hometown hero – Rico Rodriguez, an expert at taking down oppressive regimes. Just Cause 3 does an awesome job of bringing its huge explosions and creative destruction methods to current-gen consoles.

As Rico, your objective is simple but it’s not as easy to pull off. In order to weaken the military might and influence of Ravello, you’ll have to accomplish a series of fun objectives. The majority of the game will involve you using your brain and brawn to blow everything to bits. Freeing towns and dominating army depots leads to the game’s most anarchy fueled moments. The main campaign is there for you to complete, but on your way to your next mission you’ll always get the itch to add another home base to your growing resistance. Each location you come upon has a list of goals you’ll focus on. How you manage to complete them is all up to you.

Rico is still a walking, breathing war machine. The added usage of unlimited C4 bombs means you’ll always have the opportunity to create explosive raids. You’ll feel like you’re participating in a forgotten action B-movie, thanks to Rico’s corny quips during his most crazed moments. Navigating around each sub-island’s destination feels a lot swifter now that you have a new wingsuit and your trusty parachute and grappling hook. It takes a while to acclimate to the controls, but you’ll be staying airborne and easily hooking yourself to buildings and vehicles in no time. You’ll be putting your brain to good use as you figure out who and what should be tethered together. The action is just as fun to watch as it is to participate in.

Buy the Collector’s Edition of Just Cause 3 here.

The optional challenges feel important enough to feel like true priorities. In order to equip new mods, such as grenades that explode on impact or having the ability to pull off turbo jumps inside speedsters, you’ll need to take on missions that pop up as you gain new territories. These objectives are just as insane as your main goals, so you’ll enjoy yourself even more and gain some new abilities along the way. Driving an explosive vehicle and hopping out at the last second before it crashes into a group of baddies never grows tiresome. The least fun of these challenges are the sky races, though. Controlling planes and helicopters as you fly through marked rings is more problematic than it should be.

There’s so much to see and do around Medici. The frenzied action you’ll engage in is fun as you explore every nook and cranny of Rico’s home. All those explosions and gunfire does make the game chug a bit, though. You’ll encounter bouts of excessive frame rate drops. Sometimes you’ll dread the presence of jet airplanes, tanks and an abundance of soldiers since it puts a strain on the fluidity of the game itself. In its current state, the long load times may deter you from restarting failed missions as well.

Taking on the role of Rico once again feels gratifying. His resistance allies are full of character and Rico himself fits the bill of everyone’s favorite B-action move hero. The majority of the game’s activities do start to falter as you get deeper into them. There’s not much of a story to care about, so you’ll be blowing up anything and everything with reckless abandon. These instances start to lose their steam after performing them more than a dozen times, however. Even though the repetitive mission structure is an issue, you’ll never grow bored to the point where you’ll want to quit altogether. Just Cause 3’s fun factor stays at a solid level throughout.

Just Cause 3 stands out as one of the last big releases of 2015. And it’s definitely a title that you’d be surprised to love so much once you get sucked into it. Becoming a freedom fighter on the island of Medici means you’ll take a more, fun active role during your campaign. The huge explosions, Rico’s gear maneuvering and wealth of missions you’ll tackle are more entertaining with this series installment. The fresh mayhem starts to lose its luster later on, plus the framerate drops and long load times are the most visible issues. But still, Just Cause 3’s manic gameplay is still boisterous enough to keep you busy.

Buy the Season Pass for Just Cause 3 here.