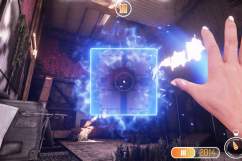 NBC’s Heroes recently got a revival on the small screen. Fans rejoiced over the debut of Heroes: Reborn, but now they’ll be forced to cry themselves to sleep once again. This heroic TV show will no longer be a part of your weekly viewing schedule. Even with this bad news comes some good news – a new video game that places players into the role of an individual learning about their superpowers within the Heroes universe is here. Gemini: Heroes Reborn surprisingly does right by its license by throwing players into a respectable 1st-person journey that feels like a cross between Bioshock and Psi-Ops.

If you’ve delved into the mobile release of Heroes Reborn: Enigma, then you should have a good idea of what you’ll be doing here. You’ll take on the role of Cassandra, a young woman who chooses to search through a destroyed research facility in an effort to find any info on her parents. When her friend gets captured, she soon discovers her superhuman abilities – telekinesis, time shifting and the ability to slow down time. While the plot setup is far from original, it provides enough reasoning to care about Cassandra and her plight. Fans of the TV show will appreciate this game even more thanks to the Easter Eggs that show up from time to time.

For those who’ve played games such as Singularity, Bioshock and Psi-Ops, the mechanics at play here should be familiar. You’ll have to solve navigational puzzles and more as you hop between two time periods within the destroyed facility – 2008 and 2014. The game presents plenty of opportunities for you to jump between both points in time. You’ll feel a great sense of gratification as you avoid security guards in one time period by jumping to another one. That same feeling will wash over you when you figure out which time period will help you proceed past a wide gap or locked door. Cassandra’s other powers can be combined in interesting ways, such as slowing down time and taking an extra big leap or catching bullets in order to throw them back at your foes.

Cop yourself an Xbox gift card and add some funds to your account so you can purchase Gemini: Heroes Reborn.

There’s a lot of fun to be had here. The overall length comes in at a manageable pace that comes in at 16 chapters. Each stage comes in bite-sized portions, which keeps this game from overstaying its welcome. However, some glaring issues keep Gemini: Heroes Reborn from being being truly great. The graphics are nothing to write home about, plus you’ll encounter moments of texture pop-in and frame rate dips. Using your telekinetic powers can be fun, but you’ll be frustrated at times due to the clunky nature of picking up some objects and clearing away vents. You’re better off playing on the game’s harder difficulty, by the way. The Normal difficulty level provides no real challenge at all, which makes some of the game’s more action-packed moments less impactful since you won’t have to worry too much about getting killed.

Gemini: Heroes Reborn shocked us by actually being a halfway decent game that’s based on a well-known property. The cool mix of superpowers your character is blessed with meets their full potential as you solve clever puzzles and take down your enemies without the need for guns. This 1st-person adventure comes in at a decent length that mimics the appropriate runtime of a special episode of Heroes. A few noticeable problems (disappointing visuals, graphical problems, a much-too-easy trek through the game on Normal mode etc.) prevents this game from being more amazing. But as it stands, Gemini: Heroes Reborn is a respectable game that offers a quick dose of heroic fun.

Cop yourself a PSN gift card and add some funds to your account so you can purchase Gemini: Heroes Reborn.