In the middle of a week during which Pokemon Go players have been subjected to constant bugs, a new update for the game has been released. What exactly did it do? Are there any major fixes here?

Well, not exactly. The only information the update itself provides is that it includes “minor text fixes.” It seems that Niantic has corrected a relatively insignificant error related to text that appears after catching Magikarps. But the big takeaway is that no, neither the three footsteps issue nor the frozen Poke Ball bug are fixed. In fact, none of the game’s major problems have been addressed by this update.

The three footstep bug, of course, is an issue players have been having for days whereby the “nearby” tracker is broken and displays every Pokemon as being three steps away, regardless of where it actually is. This has been an enormous problem that makes it nearly impossible to hunt Pokemon, to the point that many gamers have completely given up on doing so until a solution arises. At the moment, there is no workaround, and so fans merely have to wait until the game’s developer, Niantic, does something.

So when this update came out, the majority of users assumed it would be a fix for one of these game-breaking issues, but the glitches remain. Not only that, but the update caused the servers to crash.

Fans on Reddit and Twitter immediately expressed their disappointment upon downloading the update. One Reddit user wrote, “I’m actually impressed. Each update has made this app even worse.”

In general, the community is increasingly feeling that Niantic does not care about their feedback. The developer remains largely silent on all of the bugs being reported, never addressing that problems exist at all. After the release of this new update, one Reddit user posted, “I hope they fixed the bug that makes their entire company ignore its community.”

When you find out that the new #PokemonGO update is just "text fixes" and not the 3 step glitch pic.twitter.com/HJ7w71KTFD

This latest update is a joke right? =[ #pokemongo @NianticLabs

All of these issues are to be expected, though, considering Pokemon Go has become a phenomenon unlike anything Niantic was prepared for. Within the first week, the app had already attracted 21 million daily active users, making it the most popular mobile game ever released in the United States.

Hopefully, Niantic is hard at work on an update that solves these various glitches and makes the game much more user-friendly. Otherwise, those impressive numbers may start dwindling very soon. 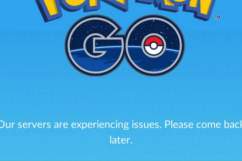 ‘Pokémon Go’ Server Status: Are the Servers Down Right Now?