Telltale Games hit an all-time high when they crafted the beautifully haunting series that is The Walking Dead. Since then, they’ve concocted a number of narrative-focused games with stories that expand on the characters and struggles within Minecraft, Borderlands, The Wolf Among Us and more. Now they’ve managed to do the unthinkable: develop another entry in their long line of adventure games for DC’s standout avenger, Batman. Batman – The Telltale Series’ first episode lets players get caught up in a web of political strafing, mafioso ties, police work and superhero crime fighting. “Realm of Shadows” is a strong start to a series that we’re sure will do its best to bring us closer into Bruce/Batman’s struggles.

The opening portion of this playable memoir is the perfect intro to a game focusing on The Dark Knight. Fans of such a powerful superhero who’s armed with gadgets and all types of martial arts were skeptical of the way Telltale would showcase these attributes. But when it comes time to throw hands with criminals and give chase to thieves, Batman’s combat skills come through in the form of some fun QTE’s. The game makes sure you know it’s time to bring Batman’s combat skills into play with his iconic logo in the bottom left of the screen. Taking on armed thugs, throwing out Batarangs and dodging incoming strikes feels and looks great in action. The action segments do an awesome job of bringing Batman’s violent comic book endeavors to life.

Once you step out of Batman’s armored suit, you’ll have to step into the millionaire playboy role of Bruce Wayne. Bruce finds himself in the middle of a mayoral race that will have major impacts on the future of Gotham City. This race attracts some of the city’s more respectable denizens and its shadiest individuals. Choosing your words wisely is of course the main element here as you converse with both groups. It’s fun to either tap into Bruce’s snobbish, admirable or stern personality traits as you choose how to respond to every situation. The wealth of familiar personalities you’ll come across here will involve you in some harrowing trials that makes choosing the right decision even tougher to endure. When you find out the dark secret at the heart of this story, you’ll find yourself doing everything in your power to protect Bruce’s good name and find out who’s truly behind the main issue at hand.

This episode does an amazing job when it comes to showcasing the most standout traits of Bruce and his alter-ego. There are two sequences in particular where Batman gets to put down his fists and use his brain. His ability to piece a crime scene together and figure out what happened comes to life in a cool puzzle-like sequences. When it comes time to set up your victims and how you’ll approach taking them down, you’ll have a ton of fun choosing your methods of attack. The combat scenes are some of the most fun gameplay moments we’ve ever experienced within a Telltale game. But be prepared to participate in a lot more dialogue events as Bruce. While these instances are interesting, we know there’s a few fans out there who’ll be more inclined to fight the good fight as Batman rather than Bruce in a tailored suit.

This intro episode to Batman’s Telltale series is better than we anticipated it to be. Bruce is thrown into the middle of a city wide debacle that ties his family legacy to the crime he promised to fight. This problem erupts into a mystery that puts you into contact with Gotham City’s best (and worst). Batman’s crime scene investigation skills, abundance of gadgets, brutal interrogation skills and combat mastery are well represented. The decisions you’re forced to make have major implication on everything, which gives more weight to this single episode. While there may be an overabundance of slower talking segments, we still got sucked into this strong start to Bruce/Batman’s latest venture. 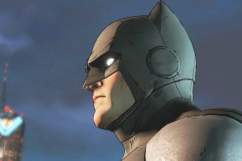