What do the flashing lights and colors mean on the Pokemon Go Plus device? (Gamestop)

The Pokemon Go Plus device is now available, but there’s still a lot to learn about how the device works. One question players are wondering is exactly how you can interpret the lights that flash on the wearable device.

The Plus device will either flash green, blue, yellow, or red. Each light means something different.

A blue light flashing indicates that you’re at a Pokestop. When you’re collecting from the Pokestop, the phone will vibrate each time it picks up an item.

A flashing green light indicates there’s a Pokemon nearby that you can catch, and it’s a species you have already caught. Once you try to catch a Pokemon, the Plus will flash the same number of times as the ball rattle animation, Neglavee on Reddit shared.

If you don’t press the button when the light flashes for a Pokestop or Pokemon, the light will go off after a short amount of time. If you’re still in the area, it might flash and vibrate again later.

If the device only flashes red and vibrates once, Plus is still connected to your phone, but your phone has lost connection to its network. You won’t be able to locate Pokestops or wild Pokemon.

The device will also flash red if it fails to catch a Pokemon, if your bag is full, or if you’ve run out of Pokeballs. 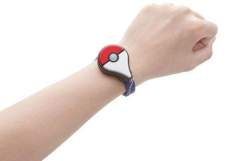 ‘Pokemon Go’ Plus Guide: What Type of Ball Does It Throw?