The Legend of Heroes: Trails of Cold Steel II – Launch TrailerPeace is but a memory. In the wake of the Noble Faction’s occupation of Heimdallr, civil war has broken out across Erebonia. The provincial armies, loyal to the aristocracy and the Four Great Houses, have claimed many of the nation’s great cities in the name of the Noble Alliance. The Imperial Army, called back from…2016-09-06T22:32:05.000Z

The Legend of Heroes: Trails of Cold Steel was a pleasant surprise. It’s interesting companion system that led to advantages in battle, mix of personalities within your band of courageous students made it one of the better (and criminally slept on) JRPG’s in recent memory. After the epic climax that put the events of that grand journey to a close, this sequel brings us back into its war torn world a month after that ending. The Legend of Heroes: Trails of Cold Steel II maintains the good reputation set by its predecessor. While it may be rough around the edges due to its placement on past-gen consoles, it still manages to provide a meaningful and lengthy adventure worth completing.

Rean is once again the at the helm of the story. He wakes up after a taxing battle and comes to discover that his beloved classmates are no longer by his side. After regaining his strength and regrouping with his close loved ones, he gets caught within a continuing civil war conflict that endangers the life of everyone. While the events surrounding the conflict that engulfs Rean’s world are usually somber and maddening, there are still a wealth of heartwarming moments between the main characters.

Characters provide random chatter as you explore valleys, dungeons and other open locations, plus there are cutscenes that provide more crucial backstory on other personalities (such as Rean’s sister). What’s shocking (in a good way) is the fact that even the random townspeople you come across also have interesting things to chat about. The text heavy exposition can be a bit taxing on the eyes and nerves at times, but JRPG fans used to this way of doing things won’t have too much to complain about. The plot behind this sequel features all the right elements that will keep you going and help you fall in love with your crew even more than before.

The Legend of Heroes: Trails of Cold Steel II – E3 TrailerPeace is but a memory. In the wake of the Noble Faction’s occupation of Heimdallr, civil war has broken out across Erebonia. The provincial armies, loyal to the aristocracy and the Four Great Houses, have claimed many of the nation’s great cities in the name of the Noble Alliance. The Imperial Army, called back from…2016-07-21T18:44:33.000Z

When you finally bump into an enemy, the real fun begins. The Legend of Heroes: Trails of Cold Steel II employs a very fun and active battle system where several mechanics are utilized. Your party members can strategically pick their spots on the battlefield, create links between each other and pull off amazingly powerful Arts, Crafts and S-Craft attacks. It’s up to you to make good use of your allies’ relationships and the Orbments gear system (which gives your party numerous boosts when attached) to constantly survive.

The fights you’ll get engaged in are far from a cakewalk. The challenge factor present during each encounter won’t frustrate you though since half the fun of them will come from figuring out how to activate new special maneuvers. The mechanized Knight battles truly shine thanks to the big machines going to town on each other onscreen. Due to this game being on the PS3/Vita, its true graphical potential isn’t fully realized. Choppy character animations and last-gen visuals prove this point: the next entry in this franchise belongs on the PS4.

Besides the heavy tale being told and the dangerous fights you’ll get involved in, there’s some extra fun to be had. You’ll get to participate in some activities that help keep the entire feel of the game from being too somber. Fishing is pretty addicting once you get good at tapping those buttons faster and snowboarding is still a joy to experience. Most RPG’s feature some sort of addictive card battler activity to master, so it should come as no shock that the “Blade” minigame is present and accounted for. The gameplay on all fronts here is strong and certainly drawn out in the best way possible.

The Legend of Heroes: Trails of Cold Steel II may have quietly hit the market over here in the States, but this doesn’t mean you should pass it by. Fans of the 1st game will enjoy reuniting with Rean and his classmates as they attempt to diffuse an ongoing conflict. The new characters and NPC’s you come across help push the story along and get you even more enraptured by each climatic event. Hopping into the tough battles are taxing at first, but mastering its complex systems is a fun task that helps keep those battles fresh and fun. Thankfully, the side activities you can get involved in are just as fun as the many battles you’ll get engaged in. The disappointing past-gen visuals, choppy character animations and abundance of text to read through at times are sore spots we have to mention here. But we still want to make sure we recommend this quality JRPG. 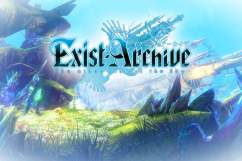 ‘Exist Archive: The Other Side of the Sky’ Review: Reincarnated for Dungeon Crawling