Exist Archive TrailerLeave Your World Behind! Aksys Games, tri-Ace and Spike Chunsoft proudly announce that Exist Archive: The Other Side of the Sky will release 10/18/2016 physically and digitally in North America for the PS4™ system and PlayStation®Vita handheld entertainment system! tri-Ace, architects of the JRPG series Star Ocean and Valkyrie Profile celebrate 20 years of RPG…2016-07-14T21:37:03.000Z

If you consider yourself a connoisseur of underrated RPG’s, then the name Valkyrie Profile should fill you with glee. This tri-Ace developed romp through Norse mythology broke the mold of RPG battle systems and exploration. Instead of sifting through varied expanses and waiting on an Active Time Battle system to carry out your battle plans, Valkyrie Profile adopted side-scrolling adventure mechanics and a battle system that adopted corresponding face buttons for your 4-warrior party. While we may not have any chances of seeing another entry in that undervalued series, a spiritual successor has arrived to take up its mantle. That game is Exist Archive: The Other Side of the Sky.

Not only does the character movement and battle mechanics feature many similarities to Valkyrie Profile, so does its plot. 12 innocent bystanders die suddenly after a massive accident in the real world. When they wake up, they all discover that their bodies have been inhabited by the many elements tied to an evil being. Their plight becomes even more troubling now that they’re no longer located in modern-day Tokyo; each of them have been transported to a world that combines magic and technology. It’s pretty interesting to figure out what’s next for these young heroes mere moments after they tragically lose their past lives. Coming to grips with their newfound mission is worth following due to the humorous conversations between each party member. There are certainly moments where everything hits a more serious or somber note. Luckily, there’s a good variation within the emotional spectrum behind the game’s important plot points.

Venturing through the colorful expanses of Protolexa controls like your typical side-scrolling platformer. Your main avatar must thoroughly explore dungeons with specific themes and discover items, utilize warp points and encounter tough boss encounters. Over the course of your otherworldly travels, you’ll become endowed with new abilities that open up your platforming skills. It becomes more charming during later portions of the game as you begin teleporting in mid-air in order to pull off higher leaps to get to higher ground (and sweet loot).

When it comes times to head into battle, each active party member has their abilities tied to a different face button. The sweeping victories you’re seeking can be sought after by planning out your character combos wisely, targeting an enemy’s specific weakness and choosing the right moment to defend. Slashing down multiple baddies with a sweeping sword slash or clearing out an entire field of bugs with a magical fire shot looks and feels pleasing. Upgrading your party members means you’ll need to rely on a basic AP/equipment usage system, but employing those acquired skills during fights brings out the game’s best mechanics and complexities.

One of the better aspects this release should have adopted from Valkyrie Profile is its art style. That series featured wonderfully animated warriors who utilized the same character designs when it was time to head into battle. As for Exist Archive, it features a weird chibi art design for its main cast members. It doesn’t appeal to this reviewer at all and is quite the disappointing visual to take in after you see how much better their static pics look. Some may appreciate the permanent stylized big head mode on display here. But this reviewer is quite sure it may keep a lot of curious onlookers from checking out this JRPG.

You should also prepare yourself for a lot of game over scenarios due to the difficulty spike that comes farther in your adventure. Getting prepared for bosses that can clear you out in just a few turns will force you to grind relentlessly. This may cause you to tire of exploring the same areas and battling the same bosses repeatedly on your quest to attain a new level. A sore spot in a game such as this one quickly leads to feelings of repetition.

Exist Archive: The Other Side of the Sky mirrors the Valkyrie Profile series’ best characteristics. It adopts its clever mix of side-scrolling dungeon crawling and battle mechanics that lends itself to more action-heavy affairs. The story itself pulls you in with a strong intro and keeps you going all the way towards its closing moments to see if all 12 personalities make it back home. However, the chibi-inspired art style behind each characters during adventuring/battling just isn’t that inviting and may force some to ignore this RPG altogether. The tough battles ahead will push you into one of the many ills of all RPG’s: heavy grinding. There’s still a lot to appreciate here. tri-Ace can build upon what it created here and truly create a worthy successor to its past work. 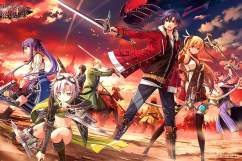 Read More
Game Review, Games, PS4, RPG, Vita
Here's our review of the latest RPG from developer tri-Ace, Exist Archive: The Other Side of the Sky.