From the very first moment that Skylanders hit toy shelves and landed in game stores all around the world, young fans have made one major request: the power to develop their very own heroes. Toys for Bob has heard everyone’s cries for this oft-requested feature and thankfully, this year’s entry into the king of the “toys to life” genre has done just that. Skylanders Imaginators breathes new life into such a long-running franchise with new Sensei characters and custom heroes, but a few new inadequate features bring this game’s experience down from excellent to just good enough.

Let’s talk about what gimmick Imaginators included that makes its worth returning to Skylanders: the character creation tool. With the invention of new Imaginite Creation Crystals tied to several elemental archetypes, you can finally create your own heroes with different battle classes. Spending the majority of your time with this release will mostly be tied to your fine tuning efforts towards all your newly conceived warriors. Luckily, there’s a nice assemblage of parts on hand so all your characters look entirely different from previous Skylanders. This is a feature that should have been a part of the series from they very start; we’re just happy its finally been implemented in an entry that’s far along enough to feature tons of other characters to adore.

The light RPG elements the franchise is known for haven’t been changed much, but it’s a lot more pleasant now that you can save the world with your own world defenders. They aren’t the only Skylanders you can attain in toy form, though; a wealth of new Sensei characters arrive on the scene. These powerful avatars utilize their own special abilities and have the power to level up just like everyone else, plus they can teach new abilities to your created characters.

Depending on their elemental class, you can take on side challenges, attain new powers and capitalize on the weaknesses of the Doomlanders you face in climactic boss encounters. There’s such a huge variety of new heroes to train (including your very own), which keeps the main campaign from getting entirely too stale. Another element that stands out is the surprisingly superb soundtrack. For example, the incredibly smooth jazz tunes that are ripped right out of an elevator and the EDM tracks that pop up after a victory are much better than expected.

Fans who’ve been with Skylanders since its birth know just how costly it is to stay up to date with all its collectibles. Imaginators makes the mistake of reaching into your pocket even more by introducing microtransactions to the whole affair. Chests that include all types of bonus items for character creation can be picked up by completing goals in the game, but the rarer items that are highly desirable can be bought in bundle packs. This feature (especially with younger gamers involved) runs the risk of draining more funds from you and is completely unnecessary.

As you venture through Imaginators, you’ll come across a few minigames that attempt to break up the button mashing action sequences. Some of them get old real fast, however. Chasing after a snail’s leftover collectibles and engaging in simple block pushing puzzles gets tiresome after doing it repeatedly. These side missions are designed to break up the gameplay, but all it does is make you want to return to the action even faster while you’re in the middle of them.

Skylanders Imaginators will bring veterans and newcomers back in droves thanks to the addition of the character creation feature set. Finally having the chance to expand and evolve your own line of heroes is supremely unbelievable. The new Sensei warriors are just as amazing on their own, plus their added experience benefits make them worth the buy. However, the addition of microtransactions sticks out like a sore thumb. There’s already quite enough items to buy outside of the main game; adding purchasable item chests feels like more of a lame attempt to drain your pockets. Plus, some of the minigames you come across tend to grow boring and repetitive after a few sessions of experiencing them. There’s still a lot of good elements here that makes Imaginators an enjoyable experience. 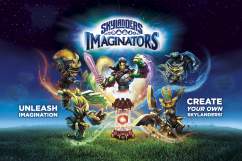