The Skylanders franchise has prospered over the years due to its creative concept of “toys come to life.”

Fans young and old have enjoyed mystical, action-packed excursions with Spyro and his friends throughout several entries. We’ve all fought hard to stop Kaos’ evil intentions in Spyro’s Adventure, Giants, Swap Force, Trap Team and SuperChargers. 2016 is bringing us a much-requested feature that fans have requested since this series was birthed – custom characters! Everyone will finally get the chance to develop their own heroes, plus older fans of PlayStation One’s orange mascot have something to look forward to.

There’s a ton of into to soak up regarding this year’s Skylanders adventure, which is why we’re here to give you everything you all need to know.

Get all your Skylanders goods here.

1. Kaos is Back Once Again to Act Out His Latest Evil Scheme

Kaos has (and probably always will be) the central baddie at the center of the Skylanders universe. He’s always managed to endanger the lives of the denizens of Skylands, but the Skylanders you’ve come to collect and strengthen over the years have put a stop to his evil schemes. For Imaginators, Kaos is back and this time he’s looking to wreak havoc with his army of Doomlanders.

For an official explanation of this entry’s plot, check out the full description posted below:

Kaos has discovered the ancient power of Mind Magic and is using it to create an unstoppable army of Doomlanders! Eon is calling upon all Portal Masters and Skylands’ greatest mystic warriors, the Senseis to stop Kaos and his minions. Now, you must use the power of your imagination to create your own Skylanders to battle in the ultimate adventure alongside the almighty Senseis to save Skylands.

2. You Can Finally Create Your Own Skylanders; They’ll Learn Additional Skills From Senseis

One thing is for certain: Skylanders’ biggest followers have always wanted to create their own characters. Imaginators takes that request and builds it out into a fully playable concept. By obtaining a single Imaginite Creation Crystal and placing it atop the new Portal of Power, you’ll get the opportunity to create your own hero. Your character can obtain their abilities once you select a Battle Class for them; those Battle Classes fall under the category of Brawler, Sorcerer, Smasher, Knight, Quickshot, Sentinel, Ninja, Bazooker, Bowslinger and Swashbuckler. The Imaginite Creation Crystals themselves come in a variety of elements, such as Fire.

Properly upgrading your own heroes means you’ll need to select a Sensei for them to learn from. As you progress through the game, these characters will help your warrior obtain new weapons, increase their level cap, access secret areas and unlock Secret Techniques if your Imaginator matches up with their Sensei’s Battle Class. The Sensei characters you can collect, play with and learn new skills from includes:

3. Fans Can Interact With Their Creations Via the Skylanders Creator App, Plus You Can Showcase Them in Out in the Real World

Getting more familiar with your Imaginator can now be done in a myriad of ways. A special iOS/Android app called Skylanders Creator will allow you to create a whole new character or customize any of your current heroes. Some other benefits of this app includes the chance to collect timed Imaginite loot chests, daily Sensei loot chests, a gallery of all your characters and the ability to share your creations via social media.

One of the coolest new ways you’ll be able to interact with your custom heroes is through new physical goodies. By interacting with the app, you’ll get the chance to immortalize your hero by requesting a 3D printed Imaginator figurine. There’s also the option to splash your character all over a custom T-shirt, which showcases him/her and their name, Battle Class and Elemental Type. And then there’s the choice to have your hero placed onto an Imaginator Card. You’ll be able to change the in-game version of your character while their card image remains the same as it was when you first got it. Placing either the custom figurine or card upon the new Portal of Power brings your character to life.

4. A Beloved PlayStation Platforming Icon Will Guest Star in This Year’s Entry

Everyone who watched the Sony PlayStation press conference at this year’s E3 got the shock of a lifetime – the return of Crash Bandicoot! He’s “crash” landing in the Skylanders universe this year, plus his first three games will be receiving the remastered treatment in the near future. PlayStation’s marsupial hero will be a playable character in the game alongside his nemesis Dr. Neo Cortex. Longtime fans will get to hop into his “Thumpin’ Wumpa Islands” stage and relive Crash’s former days as he ran wild across a tropical island. A few special “Crash Zones” will also be included, which mimics the boulder chase levels from the old Crash Bandicoot games.

At launch, the Crash Bandicoot-inspired Starter Pack will only be available for the PS4/PS3. Later on during the 2016 holiday season, this bundle will come to every other platform that Imaginators is playable on. This Starter Pack will give you a physical edition of the game, one Portal of Power, a Crash Bandicoot figure, a Dr. Neo Cortex figure, the Master King Pen figure, the Golden Queen figure, one Imaginite Creation Crystal (Fire) and a toy collection poster. This bundle is the only method towards getting you into the Thumpin’ Wumpa Islands hub world.

5. There’s Some New Toys and Software to Get if You Wanna Hop Into Imaginators

Before we get into all the new gear you’ll need to interact with Imaginators, lets make a few things clear. There’s no need to worry, folks; all your previous Skylanders are compatible with this new entry. That means your old toys and portals will work just fine. Your SuperCharger vehicles will return and be playable within the racing mode that originated in the last release. And finally, the traps used within Trap Team are compatible with the racing portion of this game, so keep your Trap-compatible portal close by.

Now let’s get to the real good stuff. For starters, there’s a Standard Edition of Imaginators available. This pack comes with a physical version of the game, the Master King Pen figure, the Golden Queen figure, one Imaginite Creation Crystal (Fire), a figurine collection poster, one sticker sheet and a new game compatible portal.

On the retailer exclusive bundle front, GameStop is offering up the game’s Dark Edition Starter Pack. This collection comes with a copy of the game, three dark Sensei Skylanders (Master King Pen, Golden Queen and Wolfgang), three Imaginite Creation Crystals (Fire, Life and Dark), one Portal of Power and a Dark Edition collection poster. Pre-orders of this pack and the other two bundles means you’ll also get a Kaos figure (this deal is only available between October 16-22, 2016). 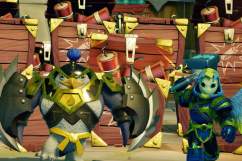