Heading into Capcom Cup 2016, which begins on December 2nd at the eSports Arena in Santa Ana, Seon-woo Lee is the player to beat.

The 31-year-old from Seoul, South Korea, who goes by Infiltration, is one of the greatest professional Street Fighter players in the world, placing first in dozens of e-sports competitions over the past several years including CapCom Cup. Earlier this year, Lee won the Street Fighter V competition at Evolution Championship Series 2016, earning himself a prize of $50,000. He took a break after that, but could he again take home the top prize at CapCom cup this year?

Here’s what you need to know about Seon-woo Lee, a.k.a. Infiltration.

Ready to board his flight to #CapcomCup2016 ! @INFILTRATION85 the #evo2016 champ is on route! pic.twitter.com/blVPdaQKM0

Although Lee did play fighting games as a kid, he did not grow up as someone who took the competition aspect of it super seriously. He was raised during the golden age of Street Fighter II, but it wasn’t until Street Fighter IV in 2008 that he really got into fighting game competition. He said in an interview with Mad Catz that he used to play the game online for hours practically every night.

Lee explained, “Street Fighter 4 is actually the first in the Street Fighter series that had a Korean localized version. On top of that, the online play was really smooth. At that time I was working at a game shop. After work, I would play online matches throughout the night. After sleeping for a couple of hours, I would return back to work. This was the real life vortex.”

Lee also says that he spends just as much time training himself physically and mentally as he does actually practicing in the game. After all, you need physical endurance to play in an e-sports tournament, and you also do actually have to be enjoying the game on some level.

“Moreover, recently I have realized that winning is not the only thing, but to enthrall during mid-match is important,” he told Mad Catz. “The decision to pick Hakan [at Evo 2013] is an example of this change in philosophy…this type of playstyle is more relaxing and allows you to enjoy the game. If you practice and solely focus on winning, your vision becomes very narrow and you eventually start losing.”

He continued this line of thought in another interview when he said that he selects his characters not necessarily by who’s strongest but also by who is most fun to play. Lee told theScore esports that “after having played [F.A.N.G.], I think he’s really fun. To me, it doesn’t really matter if the character is strong or weak. I like to play characters that are fun.”

2. He Has Won at Evolution Championship Series Three Times

Lee  is particularly well known for his performance at Evo 2013. During the Losers Semis for Super Street Fighter IV: Arcade Edition, he pulled off what IGN called at the time “the craziest comeback that we saw at Evo.” While playing as Hakan against PR Balrog, Lee seemed to be completely doomed, with just a tiny bit of health left whereas Balrog had over half his bar full. Suddenly, Lee unleashed his ultra combo, taking Balrog out and bringing them into a final round in which Lee was victorious.

Hakan isn’t really considered to be a particularly strong character, and this is actually specifically why Lee played as him.

“I picked Hakan because in part because I wanted to challenge the impression that people had of me as only picking top tier,” Lee said in an interview with Mad Catz. “I also wanted to show on the world’s biggest stage that even a character like Hakan can be marvelous.”

Lee has also attended Capcom Cup in the past, last year coming in seventh place in Ultra Street Fighter IV. The previous year, Lee came in fourth, and in 2013, he came in first in a Street Fighter X Tekken v2013 tournament. 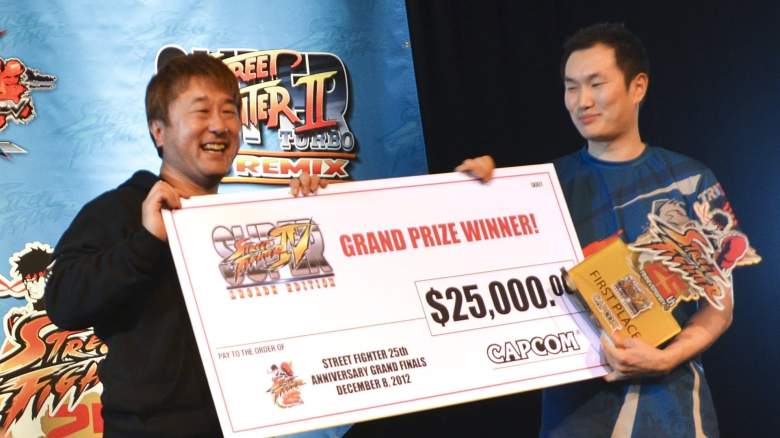 In addition to his success at Evo, Lee was also the winner of the Street Fighter 25th Anniversary Grand Finals for both Super Street Fighter IV: Arcade Edition v2012 and Street Fighter X Tekken. He won a total of $50,000 at that competition, and he also received a Street Fighter themed car. This was actually the first car that he ever owned, and he did not have a license when he won it. Though he did end up getting his license, he sold the car about a year later, according to Event Hubs.

That year, Lee won what was at the time the most prize money of any professional fighting game player in a single season. While speaking to Mad Katz, Lee was clearly having difficulty processing how much money he just won, but he said that he was extremely thankful to have entered the fighting game community at such a good time.

“There are so many good players and so many good organizers and events that made all this prize money possible, and I just feel very lucky that I was able to participate in it at this time,” he said. “I can’t really feel like I have a lot of money. I don’t know what to make of it. I can’t feel it. I just feel like I’m very lucky.”

According to E-Sports Earnings, Lee has made approximately $180,000 from 51 tournaments, with $50,000 being the highest amount he won from a single competition. He is ranked #246 among the highest overall earners, with #1 being Saahil Arora, who has won a total of $2.6 million from 57 tournaments.

4. He Lives in South Korea and Does Not Have a Manager

A lot of professional e-sports players have managers and are constantly training with a bunch of others players, but that’s not the case with Seon-woo Lee. Instead, he lives alone in a small apartment in Seoul, South Korea and is his own manager.

He trains not by playing online matches, which he says he does not enjoy very much. Instead, he utilizes Street Fighter‘s training mode, he said in an interview with Core-A Gaming.

“I go to training mode and study player tendencies so when I meet them, it doesn’t feel unfamiliar,” he said. “I do training mode a lot. That’s actually more fun for me. You know, it’s like when you’re studying and you get stuck but then you solve the problem and you’re like, ‘I got it!’ and you realize that’s how it works. It’s fun to figure out how to solve the problem.”

Although Lee does not have a manager, he does play as part of Team Razer. Lee says that his parents support him and his career, but they have actually never had the chance to travel abroad and see him compete.

5. He Was the First Person to Qualify for CapCom Cup 2016

Lee has been the most successful Street Fighter V player going into CapCom Cup 2016, as he won three out of eight of the premiere events. He also became the first person to qualify for CapCom Cup 2016 when he won Final Round 19 in March.

He was able to win this tournament despite the fact that there were some major arcade stick issues during that tournament. Arcade sticks from Razer suddenly shut down or disconnected during matches on the Playstation 4. The CEO of Razer, Ming-Liang Tan, actually had to put out a statement on Facebook explaining that the sticks in question were still prototype units which is why they ran into issues.

Lee has been hard at work preparing for CapCom Cup ever since Evo 2016 back in July.

“In terms of training, my focus was to try out different characters because I knew for sure that after Evo, everyone would be hitting the lab to learn the Nash match-up,” he told Shoryuken. “Therefore, I knew for a fact that the tier lists would change a lot prior to Capcom Cup. Right now, I’m just preparing for Capcom Cup.”

Lee said that he isn’t sure he can win CapCom Cup this year, though, because it’s becoming harder for him to stay competitive. He added that he has a target on his back because of how much he has won in the past. In particular, he said he’s worried about facing Sako right out of the gate.