‘Pokemon Go’ is currently in the middle of several holiday events. (Niantic)

A special holiday event is currently ongoing in Pokemon Go. For a limited period of time, players are more likely to encounter certain Pokemon in the wild. Which creatures currently have increased spawns?

According to Niantic, starting December 30th, the following Pokemon will spawn more often than usual:

These increased spawns will be in place for a little over a week, starting today and ending on Sunday, January 8th.

In order to help players catch as many of these Pokemon as possible, there’s another bonus going on this week. Starting on December 30th, Lure Modules will last for 60 minutes instead of the usual 30. This is an item which, when activated, draws Pokemon to your area. Nearby Pokemon will come out of hiding and make their way towards you for a certain period of time, with the item normally lasting a half-hour. Until January 8th, you’ll have a full hour to make use of that bonus.

These are the latest holiday bonuses that Niantic has launched, but in addition to that, the old bonuses are still in effect for a little while longer. Starting on Christmas day, Poke Stops starting rewarding players with single-use Incubators once a day, and you can still make use of that. Also, the generation two baby Pokemon became more likely to hatch from eggs starting on the 25th. Those baby Pokemon are:

This increase in the likelihood of hatching baby Pokemon will continue until Tuesday, January 3rd, so if you haven’t hatched one of them yet, now’s the time. Oh, and the special Santa-hat-wearing Pikachu will continue roaming around until January 3rd as well, just in case you haven’t gotten your hands on one of those.

Finally, Niantic has also made special gift boxes available in the store for a limited period of time, and those boxes will be altered this afternoon. Starting on the afternoon of December 30th, the Special, Great, and Ultra boxes will be replaced with Bronze, Silver, and Gold boxes.

Those three new boxes will include Incense, Lure Modules, Lucky Eggs, Poké Balls, and Great Balls. As with the first set of boxes, they can only be purchased using Poke Coins, which you can obtain through regular gameplay by stationing Pokemon at friendly gyms and collecting a daily coin bonus; you can also just use real-world money to buy Poke Coins, and so Niantic is clearly hoping a lot of players will spend some of their Christmas money on these gift boxes.

This week is the third time that Niantic has unveiled some sort of special holiday event in Pokemon Go, with bonuses associated with Halloween and Thanksgiving doing quite well back in October and November. It’s unclear if there’s anything additional planned for New Year’s, but these bonuses are probably meant to cover every holiday occurring around this time, starting with Hanukkah, leading into Christmas, and then ending not long after New Year’s Day. 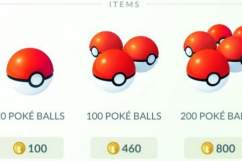