In Early 2017, everyone outside of Japan will finally get a chance to play the final chapter in the Mishima Clan storyline.

Tekken 7 has lived in arcades for a good while now, but more and more console release details have been slipping out lately. So far, a few legacy characters have been thrown into the game via the Fated Retribution arcade update – Nina Williams, Bob, Lee Chaolan/Violet, Master Raven and Miguel. Now we can all look forward to catching a few W’s as the Kuma Shinken master and Xiaoyu’s former bodyguard – Kuma and Panda. During the King of Iron Fist 2016 Grand Finals, a new trailer for both characters was unveiled. This newest piece of Tekken 7 footage showed off their moveset and an entirely new stage.

Along with that new update, a few interesting details were released regarding the console edition’s Online Tournament mode. You can read up on all that new info down below:

The new Online Tournament Mode will allow players to participate and create their own online tournaments they will enjoy with 7 other participants. Among the many features implemented in this new mode, players will find single and double elimination options, secured entrance for tournament with passwords as well as a Spectator Mode. As the outcome of the tournament, contestants will win in-game content such as fight money and various items.

Now if you happen to be up on NJPW (New Japan Pro Wrestling), then this latest bit of news should put you on Cloud 9. In a cool collaboration with the biggest wrestling company in Japan, Tekken 7’s King will sport a “Rainmaker” outfit based on Kazuchika Okada (King even uses his finishing lariat move). You can see King’s new championship duds in the trailer posted above. And you can also check out all the cool NJPW attire that’s included as custom gear down below. 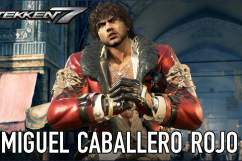