The Xbox One made sure to give its fanbase more reasons to stick with their hardware.

On the 1st-party front, Gears of War, Forza and a couple of new IP’s joined the Xbox One software family. With fresh faces representing the Microsoft gaming brand, new playable adventures welcomed Xbox One owners into worlds they wanted to return to or venture into for the very 1st time. The 3rd-party lineup of games that dropped in 2016 for the console was just as strong. Every genre got equal footing on the Xbox One, so there was tons of great games to sample throughout the whole year. We found 30 incredible experiences that gave Microsoft’s console more games to love.

Now let’s detail the best games that became a part of the Xbox One family in 2016.

Taken from Game Review: Naruto Shippuden: Ultimate Ninja Storm 4 sends the long-running series out on a high note. The massive offering of recognizable characters should satisfy hardcore fans and the improved battle mechanics are now at its absolute best. On the visual front, everything looks delightful. The boss fights’ cinematic endings will most certainly have you in awe every time. The Story Mode format falters due to the overly long cutscenes, plus the use of still images throughout most chapters are boring to watch. The lip-synching could be a lot better, as well. Those nagging issues may be prevalent, but the pros behind this anime fighter manage to make it enjoyable after all. 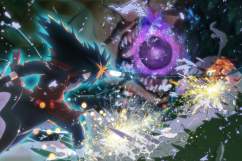 Taken from Best PS4 Games Description: The 1st Plants vs. Zombies: Garden Warfare was a surprise hit to a lot of people. It placed all of the original mobile game’s zany cast of fighting plants and zombies into a fast-paced 3rd-person shooter. The sequel did everything right when it comes to offering fans a sequel worth adopting. There was a substantial offering of new plant/zombie classes, a wealth of new online multiplayer modes and even some meaningful single-player content. Blasting apart the undead as a super-powered stalk of corn or punching all plant life into oblivion as a superhero zombie is just a portion of the manic fun this excellent sequel provides.

One of the more unique FPS titles that graced the Xbox One this year was the super underrated Superhot. It took the concept of bullet time mechanics, but it adjusted it in a way that made that element even more mind blowing. When you’re in motion, red baddies move fast and relentlessly attack you. One hit and you’re dead. But when you stop, the action does the same. This added a nice bit of strategy to the game since you could plan your moves ahead and pull off incredible kills when the mayhem starts up again. The somewhat simple take on the visuals gave this entry way more personality that expected. Blasting fools with a pistol, dodging a bullet at the last second and flinging that empty pistol into another dude’s face is actually one of the cooler things you can do in Superhot.

Buy an Xbox Gift Card here so you can digitally purchase Superhot.

Taken from Best PS Vita Games Description: For the 2nd Lego game on our list, we’re heading into Marvel Super Heroes territory. Lego Marvel’s Avengers mashes together the cinematic experiences of standout MCU films into your usual Lego video game. Marvel’s take on the city that never sleeps is back and fully explorable, which means a wealth of side missions and comic book Easter Eggs are ready to discovered. With over 200 heroes and villains to collect, there’s a near limitless amount of team-up moves you’ll end up activating as well. Tap into your Marvel Comics fandom with this quality take on the MCU in Lego form.

Taken from Best PS4 Games Description: You probably didn’t even know this crazy racer dropped last year, did you? You’d be forgiven for not knowing it ever existed. TrackMania Turbo not only threw in some of the wildest tracks ever included in a racer, it also gave you the chance to make some of your very own. We spent most of our time crafting roller coaster loops within some lush green expanses just so we could throw ourselves into some motor mayhem. The co-op multiplayer mode is another feature of this racer that helps separate it from Ubisoft’s underwhelming open-world racer. Ignore The Crew and spend more of your time making wild leaps with your custom ride in TrackMania Turbo. This stands tall as the current-gen ModNation Racers successor we always wanted.