The week before, we got a glimpse at a few returning roster members during a new story trailer, plus we spotted a few new faces for a split second. A brand new member of Injustice 2’s superhero contingent was showcased exclusively by WWE’s Xavier Woods on his UpUpDownDown YouTube gaming channel – Firestorm!

The nuclear powered fighter likes to attack from a safe distance with a bevy of ranged offensive maneuvers. His special ability allows him to power up to three levels of nuclear power. Once activated, he can dish out even more damage with powerful blue flames. After seeing Firestorm in action on the Legends of Tomorrow TV show, getting to play as him in Injustice 2 is a dream scenario that’s finally a reality.

Check his gameplay out in the trailer above (you can also see the full UpUpDownDown reveal down below as well). 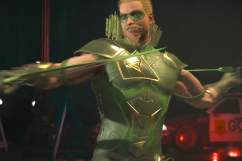